HEATWAVE conditions sweeping across eastern Australia are forecast to continue for several days, with widespread temperatures in the low to mid-40s sapping moisture from already dry summer cropping fields. 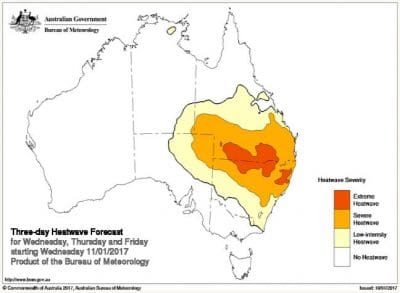 Temperatures well above average for southern Queensland and northern NSW have triggered Severe to Extreme Heatwave conditions on the Bureau of Meteorology’s Heatwave Forecast.

The hot conditions will extend from inland Queensland into the south-east of the state over the next few days, with high humidity making the conditions even more uncomfortable.

In NSW, a wind change on Thursday may result in temporary relief for southern and central coastal parts of the state, however this change will be shallow and any relief is likely to be short-lived with the heat building up again on Friday.

B&W Rural manager at Moree in North-West NSW, Peter Birch, said the heat was having an adverse impact on sorghum crops which were in the grain fill stage and were already suffering moisture stress with virtually no in-crop rain.

“Any ideas of five tonnes/hectare have probably gone for most people. It is probably back to 2.5-3t/ha for a lot of the sorghum,” he said.

“There was some patchy rain before Christmas, so anyone who got some decent rain out of that won’t be too bad. But it hasn’t been a good summer for sorghum in general.

“The crops have been under minor stress for a while and this week will burn the rest of the moisture out. That will mean smaller grain and lower yields.”

Mr Birch said the heat would not be as damaging for irrigated cotton crops that were receiving regular waterings.

“It won’t hurt it if people are putting a lot of water onto it. They are down to eight or nine-day irrigation cycles now, so it is using an awful lot of water. But while it is using the water it is growing, so that is all good,” he said.

But it is a different story with the substantial plantings of dryland cotton that have gone in this season with the impact of the heat varying from farm to farm.

“It is not too bad, but at some stage all the dryland cotton needs a good soaking rain. If it doesn’t get any it won’t be any good.”

The Bureau advises the public to stay tuned for the latest forecasts and warnings from the Bureau, and follow the advice of local emergency services.