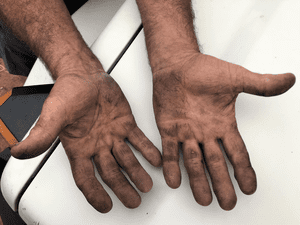 Once again, Mary O’Brien has highlighted the need for everyone to look out for those doing it tough in rural Australia with a heartfelt poem, ‘The Hand Shake’, which she has written as a “salute to the toughness and softness of rural men”.

Lately you have copped an absolute flogging from every angle; the general public, politicians, and Mother Nature are all doing their best to break you.

I wish those who are so quick to judge you could see your true heart.

Your hands may be covered in dirt, cuts, bruises, callouses, scars, grease, mud, blood, sweat or tears but don’t ever apologise for your hands or what you do.

Those hands are the story of your life.

If people don’t want to shake your rough dirty hand, then they don’t see your story and they are all the poorer for it.

He thrust his hand out boldly, with a smile upon his face,

Then glancing down he pulled it back, in shame and half disgrace.

‘Sorry love my hand is way too dirty, to shake the likes of yours,

‘There’s grease and dirt and god knows what, on my rough old paws.’

His smile just briefly faded, as he wiped them on his shirt,

I wonder did he even see, the story in his hand,

All the blisters, cuts and bruises, from him working on the land.

The bent and broken finger, from when the micky hit the gate,

The cracked and blackened fingernail, when he held a chisel for a mate.

He may have seen those battle scars, but did he see the rest?

The story of his life laid there, a toiler of the best.

Those hands have cut the mulga, put out the licks and block,

And from a muddy dam, they have pulled the dying stock.

They guide the header through the crop, over hectares ripe and gold,

Then into church on Sunday, his partners’ hand they hold.

Embedded with black diesel grease, and burrs from woolly sheep,

They brush the frost off windscreens, as he starts while others sleep.

His hands have tied the truckie knots, to hold the precious load,

Then they steer the massive road train, as it rumbles down the road.

They proudly taught his son just how, to hold that cricket bat,

They clean the trough, shoe the horse, and help a lady change a flat.

Leather they have polished, then tightened up the girth,

They gentle break the yearling colt, and draw mud maps in the dirt.

These hands have bled so many times; he scarcely feels the pain,

They pass the footy, turn the snags, and check the gauge for rain.

That hand has locked in contracts; with this hand, he gives his word,

They have shovelled mud around the wheels, and have saved a baby bird.

Hands that wave his hat about, pushing weaners up the race,

They’ve held a tiny tea-set cup, to see the smile upon her face.

Hands that relocate a brown snake, when it somehow gets inside,

They have evacuated green frogs, and buried Fluffy when she died.

Those hands have cracked a stock whip, and dressed a fly blown sheep,

They rub his aching back, as he dreams about some sleep.

Tough hands that dug the postholes, and welded up the gate,

They’ve rolled a fleece, cheered his team, and passed a cold one to a mate.

They’ve wiped the sweat, chased the flies, and even broken up a fight,

They tap the calculator buttons, in his office late at night.

He has pressed those hands together, as he muttered prayers for rain.

They fix the pump, start the siphons, and scratch his troubled head,

And then they rub his weary eyes, as he finally heads to bed.

These hands untangle Christmas lights; kids and tinsel all around,

They check the crop has sprouted, as they scratch into the ground.

They tend the vines, they pick the fruit, they crush the sweetest cane,

Then they hold a tiny pushbike seat, and cradle children in their pain.

Hands that lay a wreath for grandad, as the haunting Last Post plays,

They wrap around his family, as he waits for better days.

With these hands he fought the bushfire, to save his neighbours’ crop,

They have tied his daughter’s laces, and thrown hay bales up on top.

Those hands have fixed the windmill, and split the ironbark log,

They’ve shorn the rams, checked the crops, and cupped water for his dog.

To safety, they have pulled him, up the stockyard rail,

And they wiped away his silent tears, when the crop got smashed with hail.

He looked a little ill at ease, as he stood there in the yard,

Especially when I grabbed his hand, and shook it long and hard.

I hope he understood, that I saw much more than grime,

‘Mate, it’s just a bit of dirt’, I uttered one more time.

Looking past the grease and dirt; I see his joy, his pain, his tears,

If you’re watching with your heart, you see the story of his years.