Trailers have been built by BTE for Kelvin Baxter Transport to enable it to make use of increased load limits in Victoria. Photo: Scott Arnold, BTE

TRUCKS will do much of the heavy lifting into Victorian ports this harvest, and those operating with accredited rigs on selected routes in Victoria can expect some increased efficiency thanks to revised State Government regulations.

They will allow payloads of up to 59 tonnes, an increase from 44t or so under previous limitations, to be taken to sites including the ports of Geelong, Melbourne and Portland.

Trade sources have told Grain Central rail is expected to carry a maximum 40 per cent of grain for export to Victorian ports, less than was expected if the Murray Basin Rail Project (MBRP) had been operational in time for this harvest, the biggest for eastern Australia since 2016.

The MBRP was to replace broad-gauge lines with standard gauge by 2018 on three lines in north-west Victoria, where the bulk of the state’s grain is grown, but the task remains far from complete.

Some road-transport operators including Riordan Grain Services are already getting part of their fleet ready to carry more grain per movement by using A-doubles on approved routes.

A-doubles are the longest combination that can be used on Victoria’s High Performance Freight Vehicle (HPFV) network, which is being developed by the Victorian Government to allow the road-freight operators to improve their efficiency.

A-doubles have a maximum length of 36.5 metres and a gross weight of 85.5t, exceeding the workhorse B-double combination at a maximum 30m and 65.5t.

“It’s certainly a work in progress, and it’s only the newer type of trucks and trailers with electronic brake systems and other safety features that can be certified,” Mr Strawford said.

“We’ve got some new transport equipment because of the changes, but it can be a six to nine-month exercise to get it operational and certified.”

The HPFV network is concentrated in Victoria’s western half, where many bridges on minor and arterial roads, and even some on highways, have load limits which exclude laden A-doubles.

Mr Strawford said routes as well as vehicles could require certification, which could call for the services at the transport company’s expense of independent bridge assessors.

“There are a lot of things to go through.

“As an industry, we chase our tails a little bit because the freight task gets bigger all the time, and it’s only when the crop’s growing up the fence that the authorities can see how much needs to be moved.

“We’re all trying to look to the future and see what sort of fleet we can operate, and how we can move more grain for less money.” Riordan Grain Services is based at Lara near Geelong, and can pull grain from as far north as Lake Cargelligo, just south of the Lachlan River in New South Wales, for domestic customers and export.

“In the past couple of years, Victoria has been blessed to have a good crop when NSW hasn’t, and we’ve had NSW trucks in here assisting with our harvest.

“This year they’ve got a big crop of their own, and all the resources we can find will go into shifting the Victorian crop.”

NSW is already well into its harvest of around 2 million tonnes (Mt) of barley and more than 10Mt of wheat,  a massive increase from last year’s drought-hit crop which yielded around 700,000t of barley and 2Mt of wheat.

Through its storage network in Victoria and from on-farm pick-ups, Riordan Grain Services has in recent years loaded its own cargoes at Geelong and Portland with mobile ship loaders.

Using road to bring grain from farms and its storage network in Victoria and southern NSW, it has achieved efficiencies with road which enable it to compete with rail-fed bulk export terminals.

Despite the problems of the MBRP, the capacity of Victoria’s rail network is still invaluable for all but the smallest crop years.

“If you have an average or above-average season, you need rail and road to move the grain.”

Kelvin Baxter Transport is based at Berrigan in the NSW Riverina, and with its fleet of around 40 trucks plus sub-contractors, regularly operates in Queensland and Victoria as well as NSW.

Managing director Kel Baxter said any heavier load limits were “a step in the right direction”, and companies like his were already investing in new equipment to make the most of them.

He said access to the port of Geelong for A-doubles was possible, but getting there via Melbourne was problematic because of non-negotiable limits on the Melbourne Ring Road and the Princes Freeway.

“We’re on the cusp of gaining access for 57-58t grain loads into Geelong from various origins, but we’re plagued with weight restrictions,” Mr Baxter said.

“If all the ducks line up, and there’s a very limited chance for that sort of weight that they will, it’s a good thing.”

“You need smart brakes, you need vehicle approval and you need access on the HPFV network, and possibly off the network.

“You can build the equipment, and find you have nowhere to go with it.”

Mr Baxter said rail’s role as the heavy lifter on export grain was set to continue, but access to major domestic consumers for rail has become harder as cities have grown, and allowing combinations like A-doubles to service metropolitan consumers would increase efficiency.

“It’s taking an age to come to pass that we get anything bigger than a B-double carrying 40-44t of grain into consumers in the big cities.”

On the plus side, the allowance made during drought for road trains traversing north-west Victoria with hay and grain has been made permanent.

“The recent Drought Road Train Network has highlighted the benefits of how increasing access for HPFVs can reduce supply chain costs for farmers.”

However, a number of bridges over the Murray River which separates NSW and Victoria are not rated to carry A-doubles, so route-based limits on their interstate movement remain.

The VFF has been lobbying the Victorian Government to deliver the MBRP, which has been funded by State and Federal governments. 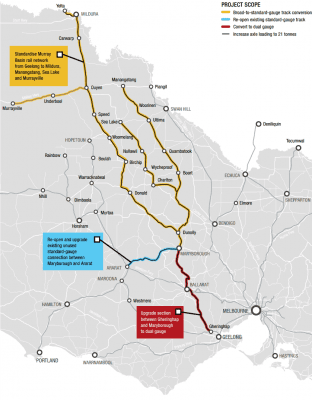 The Murray Basin Rail Project is yet to deliver an upgrade on the grain lines from Dunolly to Sea Lake and Manangatang. Image: Invest Victoria

However, only the Mildura line has been converted from broad to standard gauge to enable it to link in with national rail network.

The Victorian Government has now asked the Federal Government for additional funding to complete the MBRP since initial funding has been exhausted without delivering the expected outcome.

This means grain for export has to be trucked west to sites on the Mildura line, or direct to port, and cannot access the Australian Rail Track Corporation network, which includes the Melbourne-Brisbane Inland Rail project now under construction.

The state of the MBRP made for some awkward moments for Victorian Government representatives answering questions from Senator Bridget McKenzie in Monday’s Rural and Regional Affairs and Transport Legislation Committee.

“Ultimately this means double handling of freight which results in added costs for farmers, especially in the important grain-growing regions in Victoria’s north-west,” Mr Fraser said in a further statement.

“The promised standardisation of the network would have enabled faster trains capable of carrying more freight.

“It’s frustrating that we’ll be left with parts of the network with reduced capacity and productivity.”