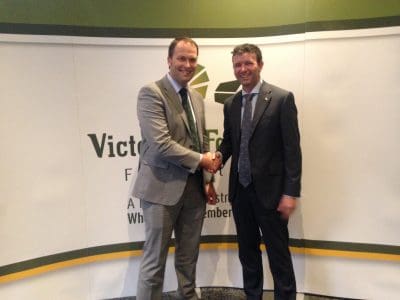 Mr Jochinke said it was an honour to take over from outgoing President Peter Tuohey.

“This is an awesome responsibility that the membership has entrusted me with,” Mr Jochinke said.

“As president, I promise I will continue the solid and strategic leadership that makes the VFF a powerful advocacy group.

“Together with the VFF membership, we will drive profitable and sustainable outcomes for Victorian agriculture.”

On accepting the Vice President’s role, Mr Hosking said he was humbled by the endorsement of the VFF membership.

“As Vice President, I will continue to fight to ensure our voices are heard and our businesses and rural communities prosper,” he said.

“We still have many challenges ahead of us, not least of which is building and gaining access to a modern telecommunications and data network, and attracting investment for infrastructure growth in rural areas. I’m confident we will continue to be a powerful force.

“I’d also like to acknowledge the passion and enthusiasm of my fellow candidates for our industry, and I look forward to seeing their continued involvement in the Victorian agriculture industry.”

Outgoing VFF President Peter Tuohey said he was pleased to see a smooth transition to a new leadership team.

“It’s great to see the energy of the candidates and their obvious passion for agriculture,” Mr Tuohey said. “The VFF has been left in capable hands.”

In an emotional farewell, Mr Tuohey thanked the VFF executive board, staff, members, and his family for helping to keep the Federation as a strong farm lobby group during his leadership.

“The pathway hasn’t been easy, and plenty of people have said we couldn`t achieve what we’ve done,” Mr Tuohey said.

“I know we’ve been watched closely and been imitated by the other states; that in itself is a worthy achievement.”