WHO is on the move in the Australian grain industry? Catch up with our latest update of industry appointments, rewards, retirements and achievements.

GRAIN Producers SA (GPSA) will appoint three board directors to fill three vacant positions and farewell Ceduna producer Peter Polkinghorne, who has retired from the board, at its Annual General Meeting in Hahndorf today. 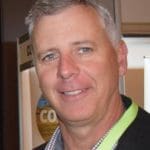 Mr McCabe and Mr Woolfoord were appointed to the board in 2016 and 2017 respectively and have since stood for election, while Jared Sampson is a new director.

Mr McCabe is a grain grower at Hamley Bridge, where he crops wheat, canola, beans and durum.

His family has been farming in the Mid North since 1956 and also farms on the western slopes of New South Wales.

Mr McCabe believes key issues to be tackled include the need to invest in country road infrastructure, reduce spiralling grain handling costs, gain access to GM crops and further promote the grains industry as a major contributor to the state’s economy.

Mr Woolford farms with his wife Chelsea and his parents near Kimba, cropping 4500 hectares to mostly wheat, barley and vetch for feed and running 5000 sheep under the prefix Karawatha Park. D

He is keen to contribute to the broad range of issues which GPSA covers, such as how supply chain costs affect farmers and the importance of machinery movement and the capacity to operate road trains on EP.

Another important issue he believes in is regulation around access to technology, such as genetically modified crops to help boost productivity.

After spending time on the other side of the fence working for Elders and Pasture Genetics, Mr Sampson returned to the family farm at Warramboo in 2012, growing wheat and barley and running a self-replacing Merino flock.

He says GPSA provides the opportunity to contribute to a number of key issues facing the grains industry, particularly land access and transparency of the process involved, which is of considerable importance to not only our local community but the whole industry.

GRAINGROWERS chairman, John Eastburn, has announced the appointment of joint CEOs to lead the operations of the independent and technically resourced organisation into the future. 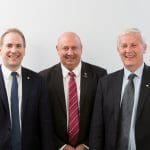 Michael Southan and David McKeon, formerly general managers of industry development, and policy and innovation respectively, have been promoted to the roles.

Dr Southan has more than 20 years’ experience as a researcher in grain quality and grain-food processing, having previously worked with CSIRO and BRI Australia.

He has a PhD in Agriculture and has made a unique contribution to milling research by combining cereal chemistry disciplines with milling engineering.

Dr Southan has held past positions as deputy chair of the Grains Research and Development Corporation’s (GRDC) southern panel and as a member of the GRDC northern panel, and is a graduate of the Australian Institute of Company Directors.

Prior to joining GrainGrowers, he held the position of manager, rural affairs at the National Farmers’ Federation and previously played a key role within the Federal Department of Agriculture on a variety of national policy issues.

Complementing his policy expertise, he has significant hands-on experience working on a number of mixed farming operations.

Mr McKeon holds a Bachelor of Applied Science (Agriculture) and Bachelor of Agribusiness from Charles Sturt University, together with a Diploma of Government and he is a graduate of the Australian Institute of Company Directors.

He continues to drive outcomes for farmers through a number of industry leadership positions, including on National Farmers’ Federation policy committees, Grain Trade Australia technical committees and the ACCC Agricultural Consultative Committee.

He has recently been appointed to the Graham Centre Industry Advisory Panel.

JIMMY Wilson will take over the role of CEO of Western Australian bulk handler and major trading organisation, the CBH Group, on 14 August. 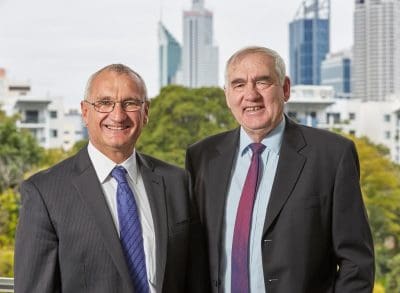 Mr Wilson was previously employed as the head of BHP’s Iron Ore division, where he managed one of the world’s largest resource assets which comprised mines, rail and ports.

Outgoing CEO Andrew Crane has been in the role since 2009, and will remain with CBH during a transition phase which will end on 30 November.

Ms Raynes has extensive experience in the Australian grains industry and was most recently operations manager at Grain Trade Australia.

She will lead AEGIC’s work in establishing the malting barley quality attributes preferred by key end-users in China.

It is anticipated this work will identify new opportunities to increase the value of malting barley exports to China so that Australian barley growers share in the potential benefits of future market growth.

AFTER three years of service, Stephen Brown will be finishing his employment as chief executive officer of WAFarmers towards the end of August.

WAFarmers has begun the recruitment process for a new CEO.

COTTON Seed Distributors (CSD) has announced the election of Tony Quigley and the re-election of Juanita Hamparsum to the company’s Board of Directors. 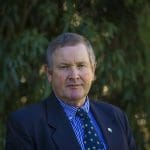 Tony Quigley’s election follows the recent retirement of Paul McVeigh, who stood down from the CSD Board in December 2016 after over 14 years of dedicated service.

Mr Quigley is an irrigation and dryland farmer who co-owns and operates five properties in the Trangie and Nevertire districts of central NSW, with his wife Sally and three adult sons.

A member of CSD since he first began growing cotton in 1984, he is also a founding committee member of both Macquarie River Food & Fibre (MRFF) and the Macquarie Cotton Growers’ Association.

He has been a director of the Trangie Nevertire Co-Operative’s irrigation scheme for over 20 years, including as treasurer.

Mr Quigley is an alternate Off-River Schemes delegate to both the Macquarie Customer Service Committee of NSW Water and the MRFF, and is also a member of the NSW Farmers President’s Water Taskforce.

Ms Hamparsum was first appointed to the CSD Board in November 2012. She was elected to the Board in 2014 and is the current chair of the Board Audit Committee. 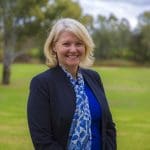 A cotton grower from the Breeza plains near Gunnedah, NSW, Ms Hamparsum also has extensive experience as a Chartered Accountant for Ernst & Young in Sydney and Goldman Sachs in London.

She has held a number of different positions within the cotton industry serving on the Board of the Cotton Research and Development Corporation, and was the inaugural chair of the Cotton Innovation Network until 2015.

Ms Hamparsum has also been extensively involved with the water reform process for groundwater across the Namoi Valley and NSW, and is the current chair of the Great Artesian Basin Coordinating Committee.

In 2009, she became a director of the Namoi Catchment Management Authority and was deputy chair until 2013. She is also the deputy chair of the National Landcare Advisory Committee.

INCITEC Pivot (IPL) has announced the appointment of Jeanne Johns as managing director and chief executive officer with effect from 15 November 2017, to succeed James Fazzino. 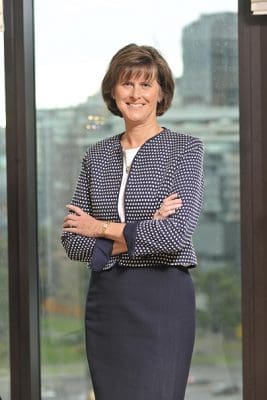 In February this year, the company announced that Mr Fazzino would be stepping down within 12 months and that a global search had commenced for a successor.

Ms Johns is an American-born chemical engineer with over 25 years’ experience in international industrial and commodity businesses, including petrochemicals and oil and gas.

During her career with BP, she held numerous leadership roles in the US, Europe and China managing multinational businesses and international strategic business development.

In late October, Ms Johns will relocate to Australia and will join IPL in a transitional role before formally commencing in her new roles.

Mr Fazzino will continue as managing director and chief executive officer and will lead the company until the release of IPL’s financial statements for the year ending 30 September 2017.

BRUCE McConnel has been appointed as the new general manager of Food Leaders Australia, a sister entity of Toowoomba and Surat Basin Enterprise (TSBE). 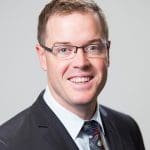 Mr McConnel completed a Bachelor of Agribusiness and Diploma of Export Management through the University of Queensland in 2001, and has spent the last 17 years in various roles throughout the Australian finance industry, specifically within agribusiness.

His most recent role was as the regional manager – South West Queensland, Regional and Agribusiness Banking for the Commonwealth Bank of Australia Limited.

He has specific interest and expertise in beef, horticulture, grains and cotton industries and their respective supply chains.

He commences his role on 28 August.

Professor Alex Thomasson, an internationally recognised expert in agricultural sensing and automation, focusing on optics and photonics for precision agriculture, has had an extended stay at the University of Southern Queensland’s Research Institute for Agriculture and the Environment National Centre for Engineering in Agriculture (NCEA).

Professor Thomasson has spent the past few months with USQ’s National Centre for Engineering in Agriculture (NCEA) and will soon return to Texas A&M University in the United States.

He has researched engineering aspects of production and processing for multiple crops with principal focus on cotton, and his teaching has included transport phenomena, machine design, measurement and control, optoelectronic sensors, and precision agriculture.

Run by Art4Agriculture, the YFC program identifies youth ambassadors and future influencer working in the agriculture sector. The YFC promote positive images and perceptions of farming and engage in activities such as The Archibull Prize.

Ms Lehmann, the daughter of well-known consultant, the late Chris Lehmann, hails from the family cotton farm at Narrabri, NSW, and works in cotton research.

After studying landscape architecture Ms Evans discovered cotton on the plains of Warren, Bourke and Gunnedah, NSW, and changed her career direction.

Currently a fourth-year agricultural science student at The University of Sydney she believes passionately in the industry.

GRAIN Trade Australia (GTA) has congratulated the first two students to complete the new GTA Diploma of Grain Management, designed to prepare graduates to work in an increasingly sophisticated and complex industry. 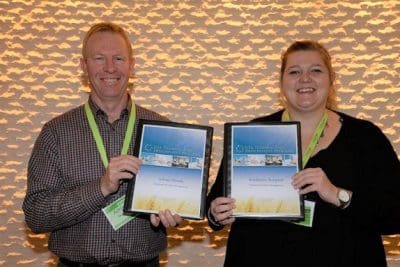 South Australian, Kimberley Hoepner, and Western Australian, Adrian Mondy, completed the diploma in record time and while working as full-time employees in the grains industry.

The GTA Diploma of Grain Management was developed after two years of consultation with industry and is recognised under the Australian Qualifications Framework and accredited by the Australian Skills Quality Authority.

Ms Hoepner grew up on her family’s grain property near Balaclava, in the mid north of SA between Clare and the Yorke Peninsula.

She is employed as a grain accumulation officer at ADM Adelaide, which also sponsored her study.

Ms Hoepner graduated from Marcus Oldham College with a Bachelor of Business majoring in agribusiness, and saw the Diploma as a chance to hone her grain skills.

WA graduate, Mr Mondy, was sponsored by CBH and has worked in agriculture for most of his life at Mukinbudin and then Calingiri.

He says the diploma gave him an insight into different parts of the grain industry.