Carnarvon at Mungindi is an established irrigated and dryland cropping property. Photo: CBRE

TWO CROPPING and grazing properties at Mungindi with irrigation entitlements from the Barwon River catchment are up for sale, as is a water entitlement from separate vendors.

Jointly covering 6672 hectares close to the Queensland-New South Wales border, the two Queensland properties are expected to fetch close to $22 million each, and are for sale by expressions of interest.

The largest is Carnarvon, which covers 4356ha and includes 988ha developed for flood irrigation, 406ha of dryland cultivation and 2962ha of grazing and support land.

Garrawilla and Belmore form the other property being offered and cover 2316ha, comprising 1398ha developed for flood irrigation, 362ha of dryland cultivation and 556ha of grazing and support land. 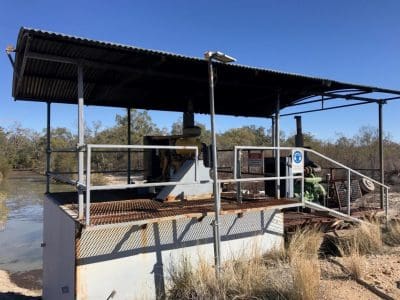 Garrawilla has an entitlement to water from the Barwon River at Mungindi. Photo: CBRE

“These properties represent an outstanding opportunity to acquire scale and quality in one of Queensland’s most renowned agricultural regions,” Mr Cudmore said.

“We expect they will receive buyer interest from corporates and large local landowners attracted to the significant water entitlements and storage, coupled with the future development potential the asset provides.”

The properties have historically produced irrigated cotton crops which have yielded 13-14 bales per hectare.

Carnarvon has fertile soils underpinning high cotton and grain yields, as well as on-farm storage which can hold 11,370 megalitres.

Positioned in 1882, it marks the 29th parallel of latitude, which forms the straight section of the Queensland-New South Wales border that stretches east from Cameron Corner to the Barwon River at Mungindi.

The properties are being offered for sale separately, and can jointly store 6700Ml of water on-farm, and has an allocation of 7293mL from the Barwon Zone Nominal Volume.

While the properties are being offered by three separate vendors, Mr Cudmore said there were being marketed jointly as a contiguous holding which offered “considerable size and scale”.

Vendors are: Ralph and Barbara Grey on Garrawilla; Steve Thomas on Belmore, and the Barlow family on Carnarvon, which runs into NSW.

CBRE Agribusiness has been appointed to sell just under 35 per cent of available B-Class, and less than 1pc each of A and C-Class water entitlements in the Barwon-Darling Unregulated River Water Source Zone.

The entitlements are being offered by several farming families, principally cotton growers, on the basis that the water entitlements might be returned to the Barwon-Darling river system.

Agents Richie Inglis, Col Medway and Danny Thomas have been appointed to sell the portfolio.

Mr Thomas said the vendors had been monitoring public sentiment and the growing commentary around the alleged causes of the degradation of the Barwon-Darling river system and were offering their water entitlements voluntarily.

“In doing so, the vendors have provided an opportunity for government, conservation groups or others to acquire the entitlements on commercial terms,” Mr Thomas said.

“This is the opportunity for vocal critics to redirect those water entitlements away from agriculture and, in effect, take real action to return water to the Barwon-Darling river
system.”