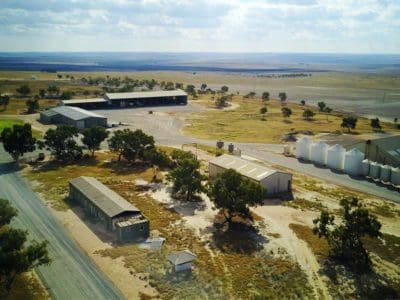 Erregulla Plains has been sold by the Smart family to Daybreak Cropping. Photo: Ray White

The sale price of the 22,192-hectare spread has been reported at $97.6 million, or $4399/ha, and lifts Daybreaks cropping portfolio to 75,000ha in total across New South Wales, Queensland, Victoria and WA.

Erregulla Plains is a large-scale producer of winter crops including wheat, canola and lupins, and also runs livestock.

Through Ray White agent Steve Vaughan, the property was sold via an expressions-of-interest campaign, and winds up three generations of Smart family ownership.

South Australians Eric and Jean Smart settled on the property in the late 1940s, and their mixed-farming operation helped to pioneer the use of lupins, superphosphate and clover on sand-plain country in the region.

Erregulla Plains has a long history of supporting research, particularly into lupins and soil improvements in cropping systems, which remain an important part of the farm’s commercial operation. 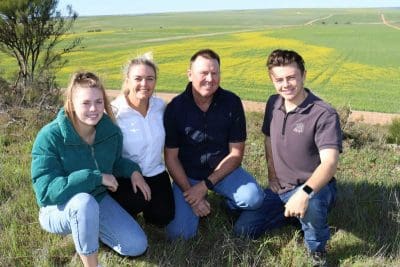 Cherie and Stuart Smart and their children Elizabeth and Samuel. Photo: Ray White

Under the ownership of vendors Stuart and Cherie Smart, mouldboard ploughing has been used to counteract problems caused by weeds and non-wetting soils, and has helped to keep Erregulla Plains at the forefront of farming practices.

Erregulla Plains neighbours the township of Mingenew, the site of one of the largest inland grain-receival sites in the southern hemisphere, and sits around 110 kilometres south-east by road and rail of CBH Group’s Geraldton export terminal.

Mr Vaughan said international corporates, as well as locals who were interested in buying parts of Erregulla Plains, expressed interest in the property, but Daybreak had a compelling fit as an operator capable of maintaining the farm’s standards.

“That’s why they bought it; it’s so well set up and well prepared, and they can just get on with the job,” Mr Vaughan told Grain Central.

“At the end of the day, theirs was the best of the expressions of interest.”

“The sellers are very pleased, and it will bring new people into the area.”

“Daybreak is pleased to have an asset of Erregulla Plain’s quality in the portfolio,” Daybreak Cropping CEO Will Heath said.

“Its scale, efficiencies, stage of development and proximity to the port of Geraldton make it a highly attractive asset.

“In addition, it is our first asset in the northern wheatbelt of WA, and therefore provides important diversification benefits for the business.

“We look forward to continuing the responsible stewardship of the asset and contributing positively to the Mingenew community.”

Daybreak Cropping was established in 2016, and Warakirri is its investment and property manager. 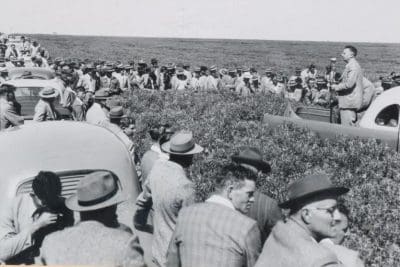 Erregulla Plains has hosted many field days and research projects under the Smart family’s ownership as a pioneer of lupin-growing in the region.

Mr Vaughan said Erregulla Plains would be the largest sale ever of a single broadacre farm in WA.

It follows the sale and transfer last year of a 200,000ha aggregation of leasehold and freehold country put together by John and Julie Nicoletti in the state’s eastern wheatbelt to the Saudi Agricultural Livestock and Investment Corporation.