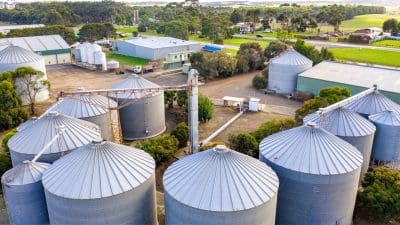 The Langdon Grain Facility at Lismore in Victoria is listed for sale, with Riordan Grain Services as its tenant. Photo: Elders

THE MARKET for bulk-grain storages is ticking along, buoyed by demand from traders and local farmers, even in drought-hit parts of eastern Australia.

Viterra’s Millicent site in South Australia and the Langdon Grain Facility at Lismore in Victoria look set to test the waters for fully operational large-scale storages, while GrainCorp remains the volume vendor.

It has been offering mothballed or underutilised storages to the market in tranches for some years, and currently has two sites near Dubbo, Birriwa and Eumungerie, and Nemingha near Tamworth, for sale in an expression-of-interest (EOI) period that was extended to 31 August.

Some above-mentioned GrainCorp sites featured in the previous Grain Central article which appeared in 2017, and revealed more trade than farmer activity.

“We do have a site sales program for assets that we no longer require, and it all helps to maximise returns to our shareholders,” a GrainCorp spokesman said.

“It also opens up those sites for other options, including grower storages.”

The Langdon Grain Facility is less than 100 kilometres from the port of Geelong, and comes with a guaranteed income from its five-year lease to Riordan Grain Services (RGS), with the option for a further five years.

“It’s in a ripping spot at the gateway to the Western District, and services an area that gets consistent rainfall,” Elders agent for the sale, Adam Chilcott, said.

“It has a blue-chip tenant, and surplus land at the back for development, so it’s got excellent potential as well as being an ideal income stream now.”

Generating a base annual income of $300,000 plus GST and outgoings, the complex holds 36,000t in total vertical and shed storage.

RGS got the lease on the Langdon property when Langdon Grain Logistics (LGL) and RGS merged in 2016.

The site has been used to accumulate grain for export, and to service the domestic market.

In the south-east corner of South Australia is Viterra’s Millicent facility, a 140,000t storage which is for sale through CBRE via expressions of interest.

“We’ve done a number of inspections, and we’ve had some local interest, some corporate interest and some interstate interest,” CBRE agent Phil Schell said.

“It’s good to see the property being so widely attractive.”

Millicent is still holding grain which is yet to be out-turned, and is one of 16 sites in South Australia Viterra announced in June it would not reopen.

EOIs on GrainCorp’s Kerang bunker and silo sites in northern Victoria were due 2 July.

They are currently leased by the Kerang-based Lipp Group under a three-year agreement which expires February 2020.

Corina Lipp-Booth said Lipp Group’s interest in the site sprang from its need to store fertiliser.

“We were involved in fertiliser until 12 months ago, when we sold to Landmark,” she said.

The company has retained its gypsum, salt and transport arms.

“We’re still in agriculture, but we’re not dealing in fertiliser.”

South-west of West Wyalong in NSW is Buralyang, which holds 7200t in vertical storage, and was purchased earlier this year by Martin Quade and Colin Reid, who farm separately and close to the site. 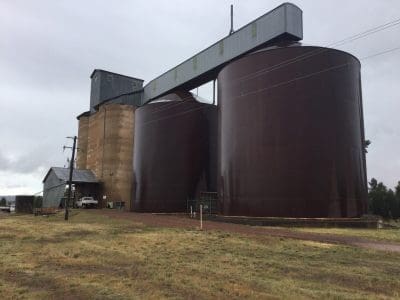 “We’re 50 kilometres or more away from a local receival place, and if we have a big harvest, we’d have to employ people to cart grain back and forwards all day.”

“Having Buralyang means we can put it there at harvest time and think about selling it later.

“It allows us to be in control of our grain, and it’s good, even in a year like this.

East of Dubbo, Ben O’Brien, whose home property is at Suntop near Wellington, has acquired two former GrainCorp sites, one at Combo, and one at Wongarbon.

“I leased Combo for three years before I bought it in November 2016, and a mate and I bought Wongarbon last year.”

“I was interested in Eumungerie, but you don’t want to stretch yourself too much in these times.”

Mr O’Brien and family run a large-scale sheep and cropping operation spread across eight leased properties in the district.

He said the ex-GrainCorp storages were central to most of them.

“We did start to build our own storage, and we ordered three 600t silos in 2016, but we only got two of them up in time for the harvest, which was a big one.

“You never want to sell grain in a big year.”

“In the first year we had Combo, we didn’t set up a sale arrangement, but we stored our grain which we could sell when we felt the time was right, and we offered it as a warehouse facility.

“It paid its way, and we had wheat and lupins too in there which helped…and we’ve just finished cleaning it out.

“It hasn’t been full since we’ve had it.”

Mr O’Brien said the drought meant they have had to lay off some staff, as the plans to cart grain east and backload with fertiliser had been put on hold because of drought.

“Normally, we’d be trucking grain directly to mills or for export, and bringing back fertiliser.

“We’ve got six trucks, and they’re sitting still at the moment.”

He said he had only recently taken possession of Wongarbon.

“In the longer-term, it will be a good investment.”

GrainCorp’s Ballimore site has also sold this year to an undisclosed party.

The Yeo family’s Glenshea Trading company had been leasing the Merrygoen site north-east of Dubbo prior to purchasing it this year.

Merrygoen sits in a district where grazing has become the dominant income stream, and close to GrainCorp’s mothballed Neilrex and Mendooran silos.

GrainCorp’s only Queensland site for sale at present is located at Nobby, south of Toowoomba.

It has been leased by the Toowoomba-based company Feed Central, a major trader of hay in southern Queensland, since January 2015.

It is not planning to renew its lease at Nobby, or purchase the site, but the company is continuing to lease GrainCorp’s Oakey site, north-west of Toowoomba.

“They may be suitable for farmers who have their own maintenance capabilities, but a lot of them struggle to be suited to businesses.

“Compared to a modern hayshed, they’re difficult to get product in and out of, and they are hard to insure.

“There are fire risks and theft risks.”