THE Darran Aggregation is being offered for sale by the Lindores family, to provides the opportunity for expansion or establishment in mixed farming in the St George area of southwest Queensland. 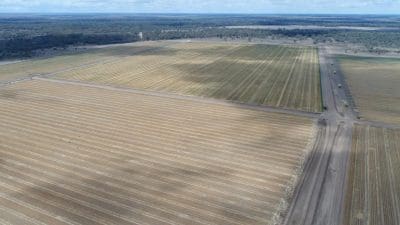 The Darran Aggregation at St George is for sale. Photo: CBRE

The CBRE Agribusiness listing is made up of three contiguous landholdings — Darran, Beardie Lagoon and Brookdale — and covers 12,096 hectares made up of 4800ha of arable land, 512ha of flood irrigation, and 6784ha of improved and native grazing.

The aggregation includes a 27-kilometre frontage to the Balonne River, license to develop an 8000-head feedlot, and an internal laneway system for efficient movement of livestock.

Darran’s crops have included cotton, wheat, barley, oats and chickpea, and the aggregation’s quality soil types would support some development for horticulture.

CBRE’s Simon Cudmore said diversity was one of Darran’s key selling points, and the aggregation was was expected to attract widespread interest because of the scope it offered in cattle and sheep production, irrigation and cropping.

“This quality enterprise has been held by the same family for the past 20 years, and is expected to attract interest from families to corporates, including locals adding to existing operations, and institutions looking for significant scale in backgrounding or breeding,” Mr Cudmore said.

The aggregation is being offered for sale as a whole or in separate lots via expressions of interest which close 29 November.