Two parcels of cropping and grazing land at Ouyen in the Victorian Mallee go up for auction tomorrow. Photo: Nutrien Harcourts

THE continuing demand for quality country in the Victorian Mallee has driven further price rises after a 1130-hectare property at Goschen smashed the previous record for the district.

The property, around 20 kilometres south-west of Swan Hill, sold at auction on Friday for $7685/ha to an undisclosed person from the area.

The wider region’s market is set to be tested again when two Ouyen titles, Gingers and The Block, go to auction tomorrow.

Nutrien Harcourts Mildura agent Michael Fernandez  said the parcels, totally over 576ha, did not offer the same cropping opportunities as the Goschen land but would still attract a lot of interest from local buyers.

He said he anticipated the titles will make $1950/ha to $2,150/ha which is on par or slightly above previous sales for the area.

“The demand will be just as strong for the Ouyen property as the Goschen property, it will just have a different dollar-per-hectare value,” Mr Fernandez said.

“Agriculture has really been the flavour of the month for the last six years, but in particular the last two or three years across all segments.

“The growth from the interest and demand over the last three years has been astounding.”

Mr Fernandez said he has two other properties in the Goschen district which are attracting the attention of interested local buyers.

“I have got other country for sale by expressions of interest near that property,” he said. 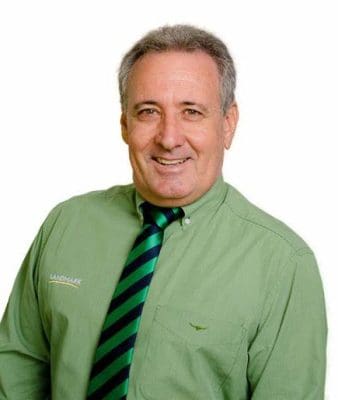 “Since last Friday I have had 24 enquiries and expressions of interest, and also to inspect.

“The demand for better country is so much stronger now in comparison to the lesser country.

“The lesser is still selling very well, but the better-producing country is really going heads and shoulders above it.”

“There has been very little land come up locally and anything that is coming up people are just jumping on,” Mr Robertson said.

He said this driver was also underpinned by the “reasonable year” had by growers.

“Last year they had a good year with lentils and the pulses and with the wheat prices.

“We didn’t get downgraded in this area; growers had a reasonable year, even though the yields were below average.”

Mr Robertson said he expected the record sale of the Goschen property would create a ripple effect on future land coming to market.

“Once you get a price like that, peoples’ sites readjust.

“They start thinking that they will have to start paying a lot more if they want to buy country.”

He said local buyers, such as those from the Wimerra region and western districts, were showing the most interest in large lots of land like the Goschen property.

Mr Fernandez said he expected market and economic factors to have an impact on Mallee prices into the future.

“One would think it has to plateau out, particularly with the broadacre farming considering what we are going through with the three big inputs with the fertiliser, chemicals and now fuel.

“You would think that will only be short term, but that could be a year or two at least.

“It will still be very good rates for the country – I can’t see it going backwards – but it will have to plateau.”