A 2000ha winter crop will be available to the purchaser. Photo: Nutrien Harcourts

SOUTH-EAST Riverina mixed property, Aratula Aggregation, has listed for sale with the holding expected to receive offers in excess of $40 million.

The 4852-hectare aggregation is being offered for sale by the Scott family, who has been working the property for five generations.

Aratula is located 25 kilometres west of Tocumwal and 40 minutes east of Deniliquin.

Over 4000ha of the property is considered arable and has a history of producing canola, wheat, barley and peas as well as lucerne and oats for grazing.

This season the owners have opted to grow 2000ha of winter crop which will be available to the purchaser.

There is also about 120ha of oats and 305ha of lucerne for fodder.

A total of 300 cows and calves and 1200 ewes and lambs are currently run on the property.

Nutrien Harcourts Deniliquin agents James Sides and Jake Freshwater have been appointed to sell the enterprise.

Mr Sides said Aratula “is a truly remarkable property” that offers future owners the opportunity to expand either the livestock or cropping production.

“It could do significantly greater livestock numbers than what they are running at the moment or grow over 4000ha of crop depending on the new owners,” Mr Sides said. 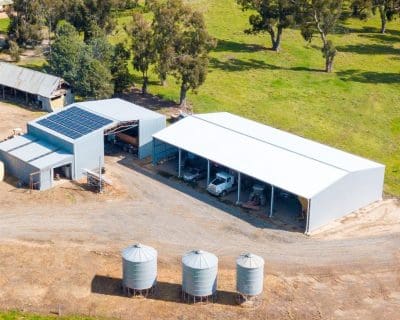 He said the aggregation has a solid production and yield history, thanks to reliable rainfall and fertile soils.

Average yield predictions for the grain crops are greater than five-tonnes per hectare (t/ha) and 3t/ha for canola.

“It has 460mm rainfall that has proven to be highly reliable and there are magnificent soil types on the property as well.”

Although Aratula only listed on Sunday, Mr Sides said he has already had strong interest in the property.

“I have had a couple of inspections prior to the official listing in anticipation.

“I have had significant interest…and an offer already; it has been very well received.”

It has direct access to sandy beaches along the Murray River.

It is being offered via Expressions of Interest as a whole of in four contingent holdings closing on October 27.