BRAZIL has invested billions of dollars improving its port infrastructure, but it will be another 20 years before road, rail and waterway bottlenecks that hamper agricultural exports are resolved, an agricultural conference in the US was told recently. 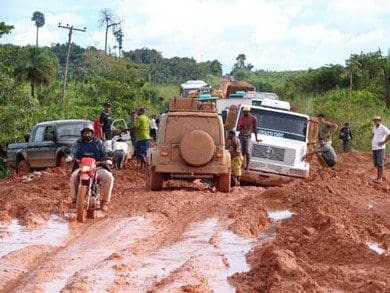 Chief economist with Brazil’s Oilseeds Association, Daniel Amaral, said as one of the world’s largest exporters of a range of agricultural commodities, improvements in port capacity had been essential to reducing the chronic delays that had plagued agricultural exports out of Brazil for many years.

“But the transport networks that feed the export ports still need a lot of work,” Mr Amaral said.

“Brazil still has an inadequate transportation matrix – we need a lot more investment in waterways and rail.”

Speaking at the conference, the US Department of Agriculture’s Clay Hamilton said roads in some parts of Brazil that connected grain and beef producing regions to ports were still not paved.

Last month, soy truckers in Brazil posted footage showing they were unable to move on an unpaved stretch of highway in the state of Para, connecting the country’s agricultural heartland to the northern ports.

Despite the inefficiencies, the country’s role as an agricultural exporter continues to grow.