A LACK of paddock feed for livestock in southern New South Wales has sparked a new round of buying from farmers in the state’s south as the need for rain increases, pushing eastern state grain and hay markets higher in the past week. 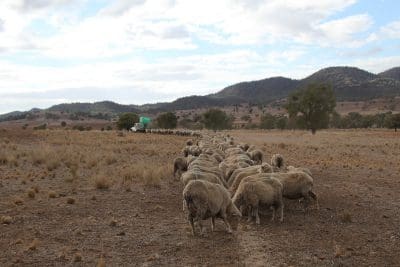 “The lucerne and clover hay has all gone, though there is still some oaten hay moving.

“Prices which were around $520 per tonne a week ago are now looking at $600 delivered.”

With affordable fodder options running out, Mr White said offers were coming from as far away as the Northern Territory in the form of jarra grass hay.

Sources said subsidies announced this week by the New South Wales Government in a bid to ease the burden would soon be used up.

This is because the cap of $20,000 per farm business would contribute to the freight component of something like two loads of hay trucked from South Australia to southern NSW.

Desperation for fodder has driven the price of low-value products like almond hulls to $150/t ex southern NSW and, according to one trader, the freight component would be almost equal to the price of the goods.

This has been driven largely by a spike in demand from livestock producers centred on the NSW southwest slopes, including the Harden district, where Mr McKinnon is based.

“It’s all coming out of Victoria, and the price is shooting through the roof.”

Indicative prices for prompt delivered grain in southern NSW are $425/t for barley and $415/t for wheat.

Mr McKinnon said graziers on the NSW southern tablelands, southwest plains and parts of the Riverina were also seeking feed as they pulled their livestock off winter crops.

“All the grazing crops are coming to their end, and because there hasn’t been substantial rain to get pastures growing, they need alternative feed.”

He said winter crops have the potential to produce reasonable yields, but needed good rain this month and into spring to kick growth along and provide sufficient grazing for sheep and cattle.

A merchant in the NSW central west said ex farm wheat, which was trading at $380/t last week, and $360/t the week before, could not attract sellers today, even though the bid had lifted to $400/t ex-farm.

New-crop barley for the same delivery period was quoted at $10/t under the wheat price.

Toowoomba-based Alliance Grains principal, Luke Walker said the Downs market had continued to creep up, with prompt delivered prices at $425/t for barley, and $425-$430/t for wheat.

He said the market was relatively quiet, as large feedlotters were holding off buying volume at these drought-inflated levels.

“It’s hard for the big guys to justify buying big amounts for next year at these prices.”

Only the most efficient integrated feedlots can continue feeding through price pressures such as those faced at present.

Cottonseed values have jumped markedly in recent weeks by as much as $80/t, again due to a lack of grower selling.

Cottonseed broker Hamish Steele Park said the market had “gone a bit crazy” over the past week or so in the south.

“Cottonseed this week has jumped higher on reduced offers, and continuation of grazier demand.

“It’s a moving target at the moment.”

Traders described markets at these levels as unsustainable, saying only rain could fix them. “People are unloading livestock, unavoidably but alarmingly many females, which will cut breeder numbers to rebuild when it does rain, as it will,” one trader said.

With no export avenue open to China for cottonseed, one trader said the price was likely to drop as soon as it rained.

“When rain fell late in spring 2017 in eastern Australia, after a period when cottonseed prices had risen to more than $450/t delivered Downs, the market corrected to $380/t.”