The Bureau of Meteorology has released its first mid-month climate outlooks today, with the aim of giving people making climate-sensitive decisions an early look at likely conditions ahead.

The Bureau said the new mid-month outlook will be issued around the second Thursday of each month, and will provide a first look at whether it’s likely to be wetter or drier and warmer or cooler than average across the country for the months and season ahead.

An outlook will also be released at the end of each month, updating the earlier release and providing the most detailed advice on likely temperatures and rainfall.

Manager Climate Prediction Felicity Gamble said climate drivers can sometimes change significantly in the space of a month, such as in October 2015, when Australia’s climate shifted into a very dry phase mid-month.

“The new outlook uses this early intelligence from the models, and provides a first look at what the coming months and season are likely to bring,” Ms Gamble said.

“Having two outlook releases every month will help those who want to use the early climate information to plan further ahead, and will also be useful for those who prefer our end of the month information for decision-making.

“Like the daily weather forecast, where the forecast we issue for tomorrow will have the greatest reliability, our end-of-month outlooks will continue to provide the clearest picture of likely temperature and rainfall for the month and season ahead. The new early-look climate information should better support agriculture and other sectors in their decision-making throughout the month.”

The Bureau’s rainfall and temperature climate outlooks show the likelihood, as a percentage, of experiencing wetter or drier and warmer or cooler than average weather for the upcoming three months. They are used to inform a range of decision-makers across industries such as agriculture, water, emergency services and energy and resources. 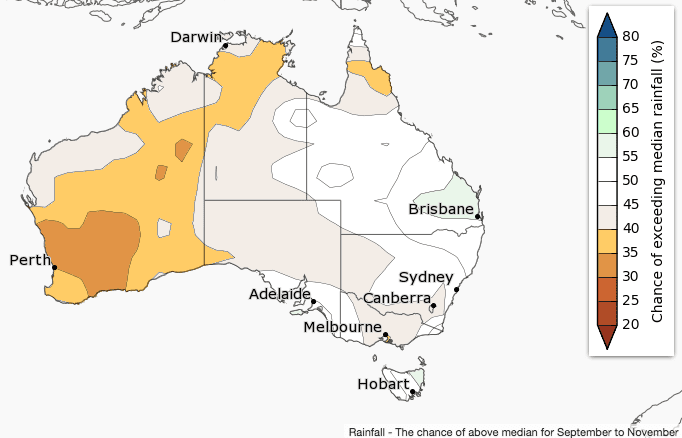 Spring (September to November) rainfall is likely to be below average for western parts of Australia, according to the Bureau’s mid monthly climate outlook statement released today.

Elsewhere, there is no strong signal towards a wetter or drier three months.

September is likely to be drier in southwest Australia, but wetter in parts of southern Queensland.

Cooler sea surface temperatures off the coast of WA are likely to be decreasing moisture flow into the region.

Historical outlook accuracy for September to November is moderate for most of Australia, but low in northern parts of the South West Land Division in WA. See map for more detail.

Warmer spring likely for most of Australia 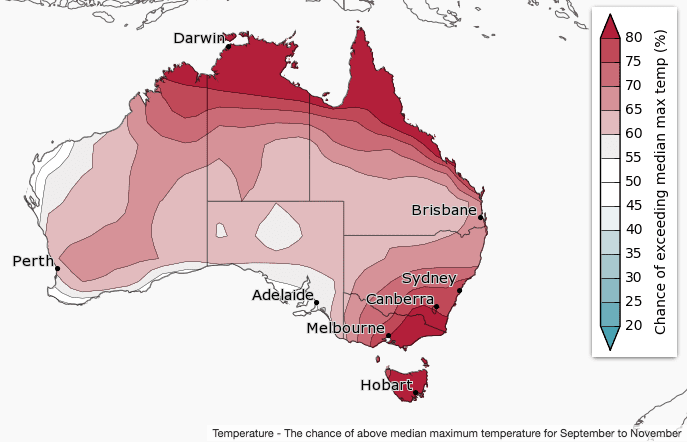 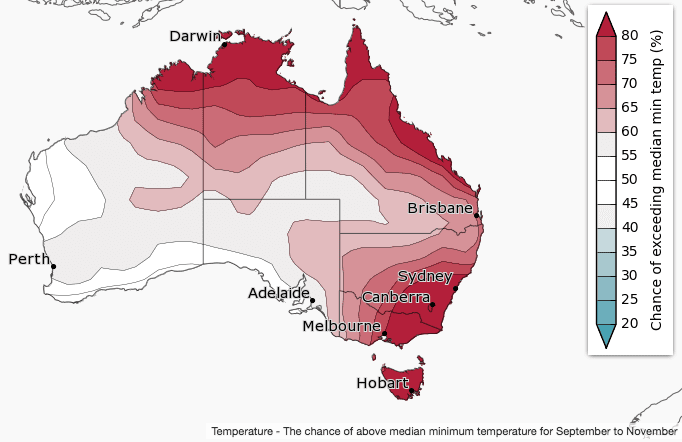 Spring nights are likely to be warmer than average over northern and eastern Australia.

Warmer sea surface temperatures off the northern and eastern coasts are likely to be influencing this outlook, keeping overnight temperatures warmer than average.