THE El Niño–Southern Oscillation (ENSO) is currently neutral, but the Bureau of Meteorology’s ENSO Outlook remains at El Niño WATCH, meaning there is approximately a 50 per cent chance of El Niño developing during the southern hemisphere autumn or winter. 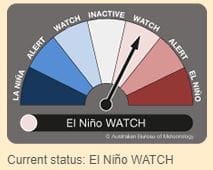 Tropical Pacific sea surface temperatures have cooled slightly in the past fortnight but remain warmer than average.

Importantly, in the central to western Pacific, warmer than average sub-surface waters persist. This is often a precursor to El Niño events.

El Niño often, but not always, brings below average autumn and winter rainfall to southern and eastern Australia.

While most atmospheric indicators of ENSO are neutral, trade winds have been weaker than average, or even reversed, across the central and western Pacific in recent weeks, leading to sub-surface warming.

However, the current ocean warmth, and the forecast for warmer than average sea surface temperatures later in the year, means the possibility of El Niño remains.

Three of eight models suggest that El Niño may establish by mid-2019, with another three models on the warm side of neutral.

The Bureau says model outlooks that span the southern autumn period tend to have lower accuracy than outlooks issued at other times of the year. This means outlooks beyond May should be used with some caution.

The Indian Ocean Dipole (IOD) is neutral. The IOD typically has little influence on Australian climate from December to April.