The ‘first-look’ Spring climate outlook issued by the Bureau of Meteorology today indicates a drier than average season is likely for most of mainland Australia. 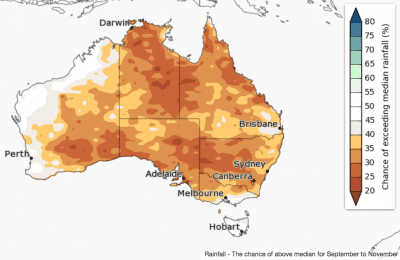 Historical outlook accuracy for spring is moderate to high for most of the country, but low along the NT-WA border, and the west coast of WA.

Spring maximum temperatures are likely to be warmer than average, except in the southeast, which has a 50-50 chance of warmer or cooler than average days.

Spring nights are likely to be warmer across northern and western Australia. With more cloud-free days and nights expected, there remains an increased risk of spring frost in susceptible areas.