A NEW version of the National Groundwater Information System (NGIS) database containing bore and bore log data for more than 870,000 bores across Australia is now available from the Bureau of Meteorology. 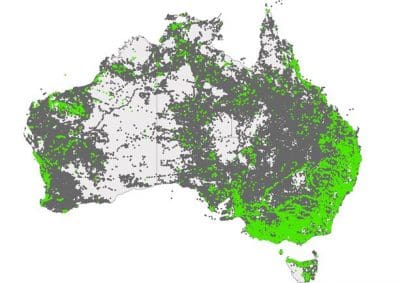 Coverage of bores in the NGIS across Australia, with recently added bores highlighted in green. (Source: BOM) (Click on map to enlarge)

The data can be viewed and analysed through the Australian Groundwater Explorer by downloading the data by State in a range of formats, or requesting the entire database as an ESRI File Geodatabase by emailing [email protected]

The Australian Groundwater Explorer provides access to the NGIS data, as well as groundwater level and salinity across the nation.

Data is available as tables and hydrographs. The hydrographs also show rainfall trends and long-term averages.

The groundwater level and salinity datasets are now updated with data current to July 2017 for some sites.

The Bureau’s Water in Australia 2015–16 report has also just been published.

The third in a series, the report draws on a range of Bureau information and products to provide an overview of Australian water availability and use.

It provides a national picture of groundwater levels for around 15,000 bores across Australia in the upper, middle and lower aquifers.

A five-year trend analysis from July 2011 to June 2016 was chosen to identify meaningful changes in groundwater level at these bores.

In addition, a status analysis compares the average groundwater level in 2015–16 with annual average levels for the previous 20 years.

According to the analysis, 80 per cent of groundwater levels in upper aquifer bores were below average to average across most of Australia.

The five-year trends in groundwater levels in the upper aquifer were mostly declining (59pc) or stable (33pc).

Similarly, groundwater levels of middle and lower aquifer bores were mainly below average to average with declining trends.

The trends and status reflect several factors that influence groundwater, including climate, land use and extractions. 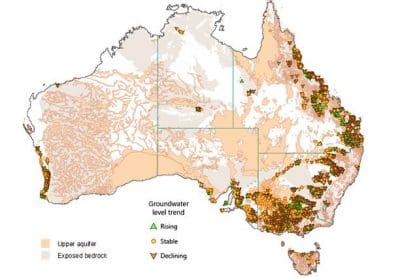 Groundwater level trends 2011 to 2016 for the upper aquifers. (Source: BOM) (Click on map to enlarge)

The Water in Australia 2015-16 report also provides information about groundwater extraction and management.

According to the report, in 2015–16, about 4900 gigalitres of groundwater were extracted from groundwater management areas across Australia.

Overall, Australia extracted an estimated 63pc of the total groundwater entitlement volume during 2015–16.