THE immediate likelihood of El Niño developing has passed, meaning the ENSO Outlook has been reset to INACTIVE, according to the Bureau of Meteorology. 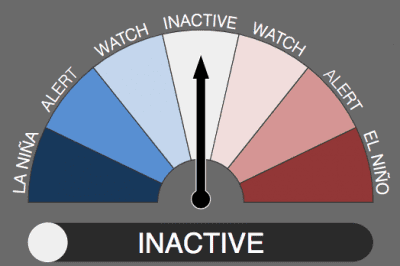 While the possibility of El Niño can’t be completely ruled out for 2019, the tropical Pacific Ocean is more likely than not to remain in an ENSO-neutral phase over the coming months.

Model outlooks indicate a positive Indian Ocean Dipole is likely to drive Australia’s weather for much of the rest of 2019, meaning the likelihood of a drier than average winter–spring remains.

Oceanic and atmospheric indicators are now largely at ENSO-neutral levels.

Tropical Pacific sea surface temperatures have cooled over the past fortnight but remain slightly warmer than average.

Cloudiness near the Date Line and trade winds have been close to neutral over recent weeks, while the Southern Oscillation Index (SOI) has hovered around El Niño threshold values over the past month.

With little anomalous warmth in the ocean sub-surface, most climate models indicate the tropical Pacific will continue shifting further away from El Niño thresholds through the winter.

While the IOD index fell below the positive IOD threshold this week, climate models indicate this is likely to be temporary, with positive IOD values forecast to persist through winter and into spring.

Typically, a positive IOD brings below average winter-spring rainfall, above average temperatures, and an earlier start to the fire season for southern and central Australia.