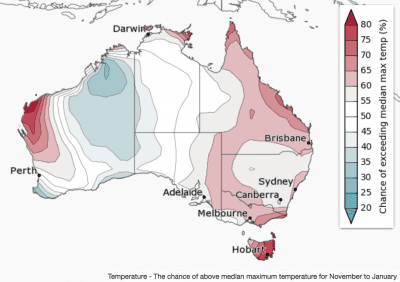 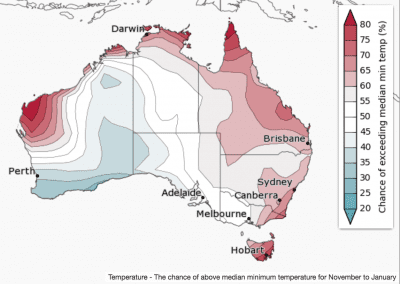 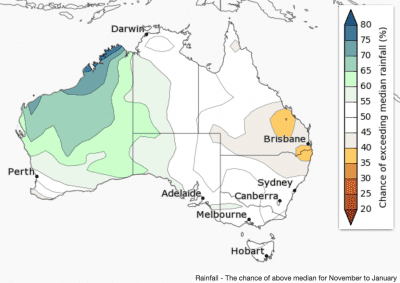 The Bureau of Meteorology’s latest three monthly rainfall outlook released this morning suggests that areas in eastern Australia may be in for a drier than average start to summer.

November to January rainfall is likely to be above average across large parts of WA.

Conversely, rainfall may be below average in some areas of southeast Queensland.

The month of November is likely to be drier across southern mainland Australia, but wetter across northwest Australia, the outlook suggests.

November to January rainfall is likely to be above average across most of WA, except the southwest.

A small area of southeast Queensland is slightly more likely to be drier than average.

For other areas, the chances of a wetter or drier three months are roughly equal.

The current outlook reflects a weakening negative Indian Ocean Dipole and an ENSO-neutral tropical Pacific. For November, a strong climate influence is likely to be a shift north in the position of westerly winds (the “Southern Annular Mode”) that affect southern Australia.

Historical outlook accuracy for November to January is moderate to high over eastern and western parts of Australia, and parts of the Top End of the NT.

Across central Australia, extending from eastern WA to western Queensland and much of SA, accuracy is low.

Warmer season likely for parts of the east