In a Special Climate Statement released this week, the Bureau of Meteorology lists some of the key record events as: 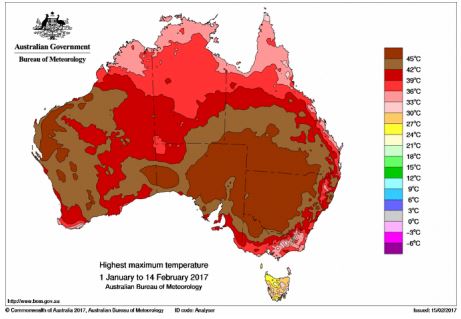 According to the Bureau’s report, in January and February there were three distinct heatwaves in south-east Australia, with the highest temperatures recorded from February 9 to 12.

It was the consistency of high temperatures more than the extreme temperatures themselves that made early 2017 an exceptional event.

When looking at all-month records, this summer’s heatwaves broke some long-standing records in central NSW which were set in January 1939.

However, the 1939 heatwave remains the hottest on record in many parts of southern and western NSW, and border areas of northeast Victoria.

This season’s three heatwaves across January and early February 2017 saw unusually high daily maximum and minimum temperatures for at least three consecutive days over large parts of the country.

The first heatwave began around January 10 and continued to January 14 with sites across inland NSW and southern Queensland recording daytime temperatures over 40°C.

Heatwave conditions returned on January 17 and continued through to January 21, while the third, and most severe, heatwave began around January 31 and continued until February 12.

During these heatwaves, daily maximum temperatures across south-east Australia exceeded 40°C over very large areas and were typically 8 to 12°C above the January and February averages. 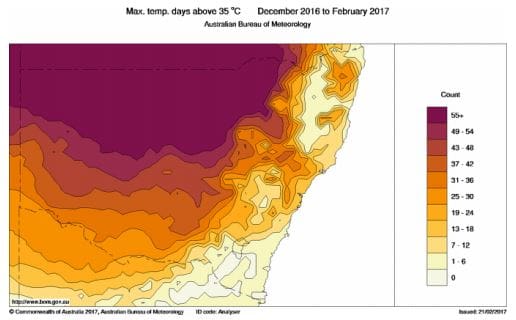 The Bureau said the underlying conditions for the series of very high temperatures included an upper level (500hPa) ridge that persisted over the continent for several weeks in January and February, and relatively low upper-layer soil moisture in eastern Australia.

The heavy rainfall totals on December 29-30, 2016, over central and southern Australia mostly missed central and northern NSW and southern Queensland. Upper-layer soil moisture was therefore relatively low over these areas in January and continued to drop through February.

The stationary upper-level ridge over south-east Australia represented large scale subsidence and low cloudiness over this region and blocked the passage of cold fronts.

In contrast to the eastern States, Western Australia experienced very wet conditions over summer. These conditions were associated with cooler than average temperatures, most notably around Perth on February 8–9.

The Bureau said the 2017 heatwaves in the south-east were comparable to historically significant heatwaves in spatial coverage, duration, and intensity.

The longevity of the 2017 high temperatures was similar to that experienced in February 2004 in SA and NSW, while January–February 2009 saw heatwaves similar to 2017 but they were located further south over Victoria and Tasmania. 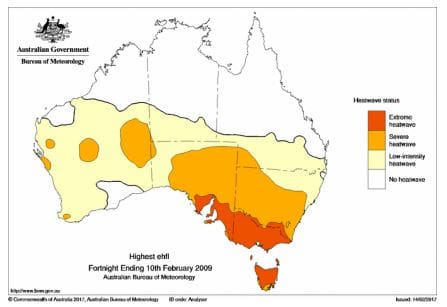 A few colonial period temperature records provide evidence of an extreme heatwave across NSW in summer 1896, which was likely one of the 10 hottest Januarys in south-Figueast Australia in the last 150 years.

However, the Bureau said these earlier data could not be easily compared with modern recordings, since many observations were taken with non-standard instrument configurations, including exposure of thermometers to sunlight and long-wave radiation, for which little supporting documentary descriptions exist.

Meanwhile, the Bureau’s latest seasonal outlook paints a picture of below average rainfall for much of Australia over coming months.

The outlook’s key points are: