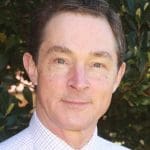 Henry Wells has been working in agriculture since the 1970s.

Born and raised in South Australia, he spent two years working in its north-east pastoral zone before heading east to obtain his degree in agricultural economics from UNE.

His Melbourne years included stints with AWB’s domestic pricing division, and trading barley, wheat, soymeal and other commodities with Bunge Corporation prior to going into grain broking.

Henry has more than 25 years’ experience as a domestic and export broker of bulk and containerised grains, pulses and oilseeds to destinations including Asia, Europe and the Middle East.

He has also grown summer and winter crops, and worked as an arbitrator on grain industry matters.

Despite being a Darling Downs resident since 1989, Henry maintains strong links with his state of origin, and loves nothing more than taking wife Liz and the kids on trips to the family’s sheep and cattle leasehold in South Australia’s low-rainfall country.