WHEN things are travelling along smoothly, we often don’t take the time to consider changed circumstances looming ahead that might take us on a bumpy ride.

It is important to stay abreast of evolving market drivers by analysing possible scenarios and responses, if we don’t want to be caught off guard.

In our previous blog ‘Blog 24 – The Times are a Changin’ we wrote about the large increase in size and value of Australian canola production and exports.

Underpinning this growth is canola’s versatility as a source of both oil and meal when it is processed.

Canola oil is recognised as a healthy option in the kitchen but it is also used across a diverse range of non-edible products, such as biofuel feedstock, cosmetics, sunscreen, toothpaste, and industrial lubricants (Figure 1).

Importantly, very little of the canola seed is wasted, as the residual meal from its oil processing is an excellent source of protein used in a range of animal feeds. 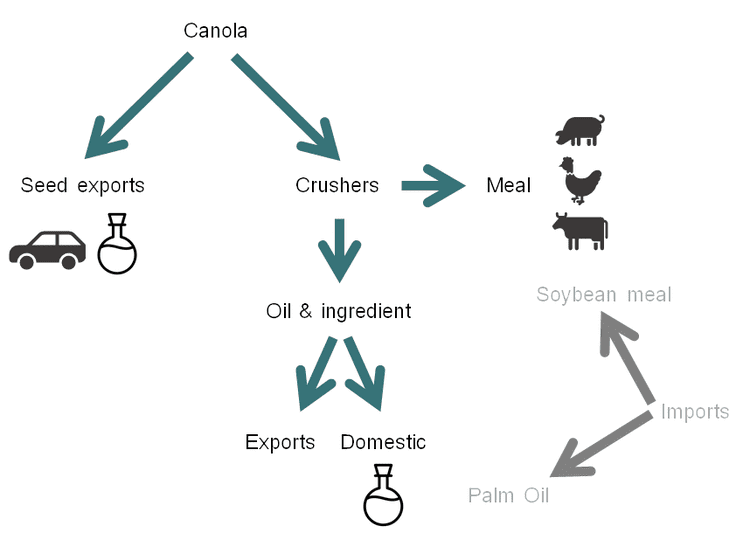 Figure 1: The various uses of canola

In an Australian context, canola competes with annual imports of palm oil (64,500 tonnes) and soybean meal (752,600 tonnes) for market share in the edible oils and meal sectors (these figures are three-year average imports to 2016/17, as published by ABARES).

Therefore, it is not surprising that over the last 15 years the level of canola production in Australia has risen at an annual average rate of 19 per cent (including seasonal variations) to around 3.6 million tonnes (analysis of ABARES data).

Domestic consumption has risen at a slightly lower rate of 12pc, leaving on average 63pc available for export[1].

This makes Australian canola important both domestically and on the world stage, where it has become a significant foreign exchange earning export commodity.

At a global level (see Figure 2), Canada remains the major exporter of canola, with a dominant market share in China (91pc), and Japan (93pc), as well as Mexico and the US where their share is close to 100pc.

Meanwhile, the European market is dominated by Australia (53pc) and the Ukraine (38pc) because of the Europeans’ strong preference for certified sustainable, guaranteed non-GM canola.

Almost all Canadian canola is now GM, with a technology adoption rate of 95pc, according to a recent ISAAA[2] report. Other destinations of scale importing canola from these three suppliers are also illustrated in Figure 2. Narrowing our focus down to the major destinations for Australian canola, the table in Figure 2 shows that annual exports to Europe (where it is predominantly used as a biofuel feedstock) have averaged 70pc, or 1.88 million tonnes of Australia’s total canola exports.

Europe’s demand for non-GM canola for biofuels has grown significantly over the last decade, buoyed by green energy policies and the power of centralised governance.

Australia’s dominant position in the European market is a potential double-edged sword, which warrants a word of caution considering the fact that cracks are already beginning to show, which could negatively impact canola exports in the coming years.

In 2017, the European Union placed a cap of 7pc on the amount of food crops to be used in biofuels.

In late 2018 proposed new laws emerged from the European parliament to phase out biofuels made from palm and soybean oil.

In addition, there has been a trend away from diesel vehicles (kicked off by the Volkswagen emissions scandal but based on broader concerns regarding pollution) and the expected growth in hybrids and electric vehicles.

This broader context suggests that challenges could be on the horizon for the Australian canola industry.

Export volumes of canola to Europe could also be impacted in the future by increased imports of biodiesel from suppliers like Argentina – particularly in years of large soybean harvests – and this may be magnified by the outcomes of ongoing trade negotiations between the EU and Mercosur (an economic and political bloc comprising Argentina, Brazil, Paraguay, Uruguay, and Venezuela).

The European market’s willingness to pay for quality is also relevant for the Australian canola industry.

If the average oil content in Australian canola keeps increasing (recent harvests have averaged over 45pc nationally), it is possible that a rescheduling of the payment system may occur.

Any decision could be driven by either sellers or buyers, and or mutual agreement of both parties.

Hypothetically, if bonification was capped at 44.5pc oil, instead of the uncapped premiums currently paid for by the Europeans, this would equate to an annual loss of around $35 million.

It goes without saying that market risk is a reality of global trade – especially in the commodities sector.

For example, trade in Australian canola to China was interrupted in 2009, when China introduced emergency measures requiring all canola consignments imported into China to be free of blackleg, a serious disease of canola, which once nearly wiped out the fledgling Australian canola industry in the 1990s.

Therefore, it is not surprising that as a risk-minimising strategy, China only allows canola from specific regions of Australia, and these shipments must be only discharged at specific ports in China.

Canadian canola exports to China must also go through one of 16 designated ports.

Both the Australian and Canadian industries continue to work with Chinese officials to manage expectations and secure the continual flow of canola.

Currently, market options outside of the major markets are limited in volume.

Markets such as Bangladesh, Vietnam, Israel, Nepal, and Malaysia have been importing increasing volumes of canola, but the levels are relatively small compared to Europe or China (averaging under 100,000 tonnes).

UN Comtrade data suggests Indonesia has been dabbling with canola, but with an abundant source of palm oil, increased demand for canola seems unlikely without a strong health or environmental push from the wider population.

Notwithstanding a projection based on ABARES data, traded vegetable oil volumes indicate that global imports of canola/rapeseed oil could exceed 5.5 million tonnes by 2025.

If this was to eventuate, it bodes well for Australian crushers exporting oil instead of seed, as long as it can be delivered at competitive prices and at scale.

We noted above that if demand for healthy oils continues to grow, canola may need to move away from its current commoditised profile towards more specialty crops like Monola.

This has the added benefit of getting the Australian grower closer to the consumer, which can reduce the risks associated with capricious government policies regarding biofuels or the potential for quarantine-related import restrictions.

We also need to keep in mind the importance of the combined value of oil and meal and ensure that a narrow focus on oil content or other quality traits is not detrimental to the value of canola meal for livestock industries.

To date, the Australian industry has been well supported by collaborative monitoring of varietal quality parameters, and this needs to continue.

Without ongoing support, quality profiles may shift unintentionally in the pursuit of delivering into one stream of canola processing over the other, consequently reducing the combined value of oil and meal.

Figure 3 highlights quality traits that could be targeted for improvement (Ayton et al, 2015)[1].

These prospective alternatives need continual review due to their relevance for creating export opportunities, as well as for domestic applications.

For example, at the recent 2018 Australasian Grain Science Conference, research was presented on expanding the use of canola meal into the aquaculture sector by a processing method that increased the meal’s relative protein level. 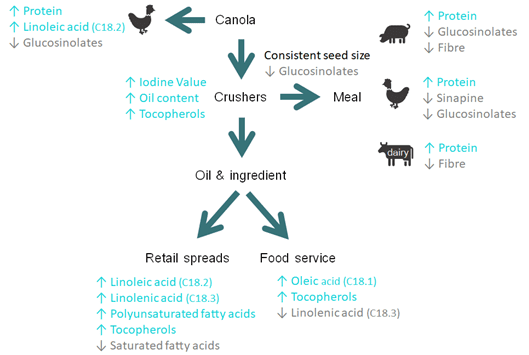 While the onslaught of market changes raised in this blog piece are likely to be at least five years away from seriously impacting on our markets, as an industry, we need to start having these conversations now.

Even though breeding of new canola varieties has never been faster, tacking a large ship to follow the winds of change takes considerable time and effort, as does developing new products and conquering new markets.

It is therefore crucial that Australia maintains points of differentiation such as its dedicated canola production (as opposed to rapeseed) and the capacity to supply sustainable and identity preserved GM and non-GM canola.