FREE Eyre Limited is outsourcing the grain-marketing function of its entity, FE Grain, to Market Check to allow it to concentrate on its proposed development of a bulk-handling facility at Port Spencer on the Eyre Peninsula. 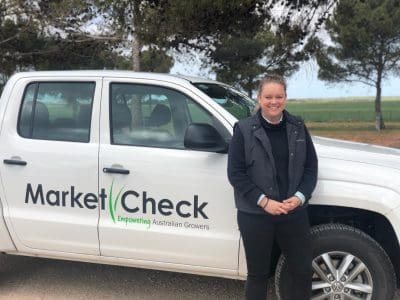 Tess Walch is one of Market Check’s two recently appointed commodity advisors in South Australia, and is based at Streaky Bay.

“A big part of our strategy differentiator in SA this coming season is educating growers around inter-state spreads and relative value so they aren’t under-selling their grain,” Market Check general manager, Richard Perkins, said.

FREE Eyre CEO, Mark Rodda, said the partnership between FREE Eyre and Market Check would continue under the arrangement, which has allowed FREE Eyre to focus on improving grower returns through the Eyre Peninsula supply chain.

Ms Roberts said while South Australia would still be exporting plenty of grain, drought in the eastern states has seen South Australian supply more grain than normal into the domestic market in a trade environment unfamiliar to many growers.

“With the shortage of grain and feed, South Australian growers are seeing lots of opportunities for different styles of marketing, and Market Check is here to provide guidance and services to them,” Ms Roberts said.

“Local cash prices and basis are at historically high levels, and we’ll be making sure SA growers can participate in these huge drought premiums on offer through the national Strategic Program,” Ms Walch said.

Market Check is running a series of workshops for existing and prospective clients this week on the Eyre Peninsula, and next week in South Australia’s southeast.

Both Ms Walch and Ms Roberts have strong backgrounds in agribusiness.

Ms Walch worked for Clear Grain Exchange and Market Check in Sydney before moving to the Eyre Peninsula in 2016 with FE Grain, and Ms Roberts has worked in management for CRT and Agfarm.