DAMAGE last week to a grain export terminal in Argentina is expected to tighten supply of soybean meal to the Chinese market in the near term, and could be sufficient to spark export buying of Australian cottonseed. 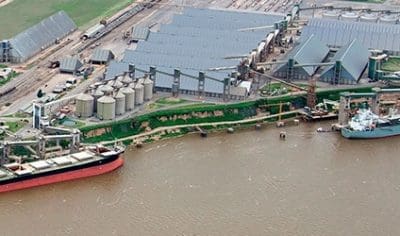 The T6 terminal on Argentina’s Parana River prior to last week’s collision which has damaged its northern berth.

Demand for around 1.2 million tonnes (Mt) of Australian cottonseed coming to the market now that ginning is at its peak has thus far been limited to domestic use for dairy feed, drought feed for sheep and cattle, and crushing plants.

China has been a volume buyer of Australian cottonseed in past years, but its concerns about Bollgard III have contributed to the market failing to fire this year.

Australia’s Gene Technology Regulator has provided the framework for exports of Bollgard III seed to China to commence, but trade sources said the export price of Australian cottonseed will ultimately determine its attractiveness.

This video posted to Facebook captures the moment in which the ship destroyed part of the Terminal 6 pier.

According to a Reuters report, the damage was caused on April 24 by a vessel, the Ocean Treasure, colliding with the Terminal 6 berth at the port of General San Martín at Rosario on the Parana River.

The terminal is part of the San Lorenzo port complex, which ships close to 40 per cent of Argentina’s agricultural exports.

Prices for soymeal rose sharply in US futures trading late last week in response to the news, and some uncertainty around shipping out of Rosario’s NAABSA terminals in the wake of the collision.

NAABSA, an acronym for “not always afloat but safely aground”, refers to tidal berths like those up the Parana River where ships do not always have clearance below their keels while moored.

Reuters reported the southern pier of Terminal 6 was operational with difficulty after last week’s collision, and that the terminal’s north dock had suffered serious damage.

Other reports said damage from the collision would take months to fix, and would slow the outturn of soybean meal for export in this peak crushing period.

Traders have said other companies may be able to temporarily increase their throughput to compensate for lost production at the AGD and Bunge facility.

According to Rosario’s chamber of commerce, the Rosario precinct in 2016 became the largest soy-complex exporter in the world, and in that year despatched a total of 39Mt of soybeans, soymeal and soybean oil.

According to T6, the facility operates three berths with a total maximum shipping capacity per year of 13Mt, and can crush up to 20,000t of soybeans per day.