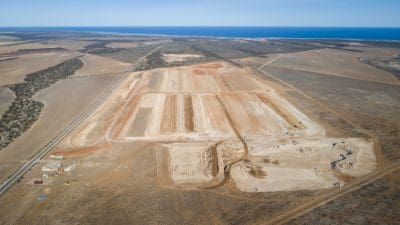 T-Ports’ bunkers at Lucky Bay (pictured under construction) and Lock will store grain ready for shipment out of the Lucky Bay export terminal. Photo: T-Ports

APART from a rebadging of sites from SACBH to Viterra, little has been altered in grain infrastructure on South Australia’s Eyre Peninsula (EP) in recent decades.

Season permitting, that looks set to change this year when the private T-Ports consortium opens its bunkers for receivals at its Lock and Lucky Bay sites.

With a combined storage capacity of around 510,000 tonnes at its completed Lock and Lucky Bay bunker sites, plus 24,000t portside at Lucky Bay, T-Ports chief executive officer Kieran Carvill said the project was ready to take its first grain into the Lucky Bay bunkers in March-April.

“If the timing of the harvest is in line with a normal season, we would be fully open in October.”

Mr Carvill said T-Ports’ aim was to facilitate an improvement in efficiency from farm to free-on-board.

“We are looking to offer a consumer-friendly service, trying to eliminate the penalties existing in incumbent systems, and granting more flexible access to loading slots.

“That is the norm in most of the world outside of Australia.”

Mr Carvill said T-Ports wanted to offer a services pricing system that encouraged deliveries to its sites, and extended the incentive to growers to plan for future increased on-farm storage programs.

“It is important to recognise the freight differential is considerable at $1-$15/t discount to present domestic haulage costs, subject to where the grower is geographically located within the catchment area.”

“We are and will be working with the trade and consumers, and where required, would look to facilitate accumulation for consumers without actively getting involved in any trading activities.”

Wheat and feed barley are expected to be the mainstay of T-Ports’ first year of operation.

“Subject to the growing season and quality, we may also be taking malting barley”.

Mr Carvill said T-Ports may consider in the future taking in pulses including field peas, faba beans, lentils and lupins, as well as oats and canola.

“We are investigating the viability of setting up a cleaning facility and offering a containerising service.”

This would be the first such service on the Eyre Peninsula.

T-Ports also plans to import fertiliser into Lucky Bay, and will be offering growers a warehousing option at Lock and Lucky Bay, and a post-harvest delivery option direct to port or bunkers, probably from February onward, at reduced rates.

Mr Carvill said the pricing of its services would be competitive, but was still being discussed internally and with the trade.

Mr Carvill said growers on the Mid and Upper EP were most likely to benefit cost-wise from delivering to T-Ports. 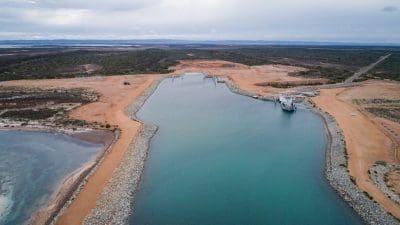 “The catchment of growers who will use Lucky Bay will depend on the freight and distances and, due to its positioning, the mid and upper EP area will certainly benefit directly.

“T‐Ports is certain other areas of EP will benefit indirectly due to competition and choice that Lucky Bay brings.

“By moving the port closer to the product, there is a substantial reduction in the road haulage distances for some growers.”

Mr Carvill said this would reduce the cost to the South Australian Government for road repairs and maintenance, and would reduce greenhouse gas emissions from the transport of grain if it did not have to travel as far south as Port Lincoln to be exported.

Apart from Viterra’s Thevenard port at Ceduna on the western edge of SA’s grain-growing area, Port Lincoln is the EP’s only bulk terminal.

A rail network operated by Genesee & Wyoming Australia (GWA) under licence from the South Australian Government currently moves what has been reported to be around 800,000t of grain per year to Viterra’s Port Lincoln terminal.

A spokesperson for GWA said any certainty on rail freight for grain harvested this year and beyond on the EP was yet to be seen.

“GWA has been committed to working with Viterra and the State Government exploring all options to continue the haulage of grain on the Eyre Peninsula regional rail network, and discussions are ongoing.

“Viterra has extended its current rail agreement with GWA for the movement of grain on the Eyre Peninsula until 31 May 2019 to meet export shipping bookings for the current season.”

Lack of certainty about the future of EP’s only rail network for grain has some in Port Lincoln fearful of increased truck movements if the rail line, which has two northern branches to Wudinna and Kimba, closes between Cummins and Port Lincoln.

Port construction at Lucky Bay is due to start in coming weeks.

The port will be the base for T-Ports’ transhipment vessel, the Lucky Eyre, which will be able to load ocean-going vessels as large as Ultramaxes at a distance of five  nautical miles from shore.

Mr Carvill said transhipment technology allowed ports to be built for 10-20 per cent of the cost of a deep-water port, and with similar or better operating-expenditure structures, which significantly reduced the minimum throughput hurdle to reach profitability.

He said the small footprint also reduced the time required to obtain regulatory and environmental approvals, shortening the time-frame from project inception to completion.

The Lucky Eyre is an 87-metre self-propelled and self-discharging vessel which can hold 3300-3500t of grain, and will load on the berth using a fixed set of elevators and conveyor belts feeding into a central hatch on the self-trimming vessel at up to 1650t per hour.

Its deepwater transfer of grain will be done with bucket elevators and a loading boom, similar to that used in conventional ports to load ocean-going vessels.

The Lucky Eyre will be able to load 10,000t of grain per working day, weather permitting, and is currently in China having material handling systems installed prior to her arrival in Australian waters in the third quarter of this year.

The design of the vessel is based on Sea Transport Solutions’ previously designed and built vessels, including the MV Aburri, which has been used for the past 20 years to tranship lead zinc concentrate in the Gulf of Carpentaria.

South Australia is unique in Australian grain exporting because all its terminals are owned and operated by one entity, Glencore’s Viterra.

In a recent report from the Essential Services Commission of South Australia (ESCOSA) into bulk-handling, Viterra’s returns, on average, were said to be towards the upper end of what might be expected for a firm with Viterra’s level of risk.

“The Commission’s analysis of returns is consistent with its fee analysis, which showed that Viterra, to date, has not chosen to share efficiencies with industry through lower fees,” the report said.

The trade does not expect this finding to prompt any legislative changes which will affect Viterra’s operations in South Australia.

Companies currently wishing to export bulk grain from South Australia outside the Viterra system have access to a berth at Port Adelaide, where vessels can be loaded with a mobile ship-loader.