OPERATIONS at Australia’s largest flour mill have resumed following an explosion on Saturday which injured one worker at the Manildra Group’s main plant at Manildra in central New South Wales. 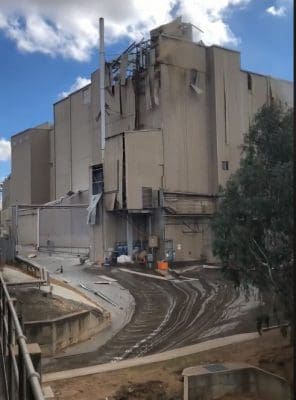 A spokesperson for the company said the explosion occurred in an area at the top of one of the mills. This has been cordoned off to allow operations to resume.

“The mill restarted on Sunday morning, and all the mills are back up and running. No supply will be impacted,” the spokesperson said.

Manildra Group said one employee sustained a minor injury as a result of the explosion and was treated at the scene by paramedics.

Staff were evacuated and emergency services called within minutes of the explosion, which occurred at around 1.30pm on Saturday.

The NSW Rural Fire Service said four brigades attended, but the explosion was not fire related.

NSW Police set up an 800-metre exclusion zone around the site, which involved some road closures, until emergency services could ensure the area posed no hazards.

Manildra Group said SafeWorkNSW was at the mill today and the company was assisting with investigations into the cause of the explosion.

The company has engaged an independent assessor in relation to the incident.

Manildra Group is a family-owned business which mills more than 1 million tonnes of wheat, or close to one-sixth of NSW’s total production, per annum.

The company also operates flour mills in Gunnedah, Narrandera and Nowra, and has additional flour, sugar, meat-processing and international interests.