SunPork CEO Professor Rob van Barneveld is one of the speakers on the PIX/AMC2022 program.

THE Poultry Information Exchange (PIX) and Australasian Milling Conference (AMC) will take place next month and for the first time, will encompass involvement from the pig industry with the SunPork Group of Companies, and an insect-protein stream.

To be held May 15-17 at the Gold Coast Convention & Exhibition Centre, the event was initially scheduled to take place in May 2020, but COVID-19 prompted two reschedules. 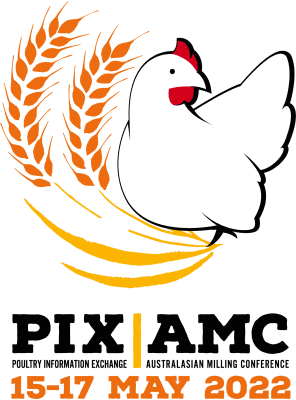 Described by organisers as the biggest and most important poultry and milling conference in Australasia, the conference has grown to a six-stream program this year, and encompasses egg production, chicken meat, flour and feed milling, plus pork and insect protein.

Streams are open to all producers and interested parties, and one registration fee enables access to two-and-a-half days of high-quality speakers and over 180 trade displays.

Host organisations for the event are PIX, the Australian Technical Millers Association (ATMA), Feed Ingredients and Additives Association of Australia, and the Stock Feed Manufacturers’ Council of Australia (SFMCA).

“Both SFMCA and ATMA will celebrate their 60th birthdays, and with four years between events, and minimal opportunities for industry interactions, the excitement is building,” PIX/AMC committee member Fiona Taylor said.

“We’re also pleased to confirm auction proceeds will support Are You Bogged Mate?”

The charity promotes itself as helping country blokes talk about mental health and suicide while spreading awareness about depression in the bush.

All delegates will hear two perspectives on the conference theme, Feeding the Future, one from the author, trend forecaster and award-winning speaker Michael McQueen, and the other from global food futurist Tony Hunter.

Mr McQueen’s clients have included KPMG, Pepsi and Cisco, and he has helped some of the world’s most successful brands navigate disruption and maintain momentum.

Mr Hunter started his career as a food technologist in the 1980s before moving into management and then becoming a futurist specialising in agrifood technology and consulting to companies, including KFC Global.

As an expert in alternative proteins and with a professional involvement with the chicken, beef, sheep and pork industries, Mr Hunter is renowned for presenting the facts without industry bias.

The pork program covers production topics, and SunPork CEO Robert van Barneveld will give his take on where Australian pork production is heading in the next 20 years.

The AMC Program will investigate feedstuffs of the future, including insect protein, seaweed, microalgae and recycled food.

The program will then include discussions on training employees in a virtual mill, trends in food grains, and mill management considerations.

Biosecurity preparedness and a comprehensive look at critical legislative overviews will take place for the insect stream.

The milling and poultry programs will discuss the use of recycled food, identifying some significant advances that will assist with Feeding the Future.

Earlybird registrations for PIX/AMC2022 close today, and a small number of exhibition booths are available.