AT a time in our history when Australians have the highest levels of mistrust and disregard for banks, politics, corporates and other centralised control systems, it’s no surprise that systems like blockchain are finding their feet. 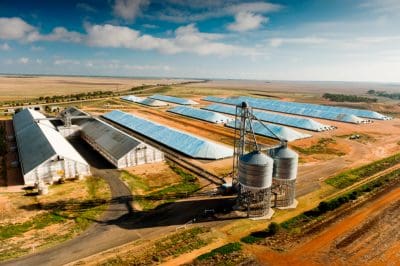 At its core, a blockchain removes central control into a decentralised model where integrity of data is the number one priority next to anonymity. There’s no doubt the blockchain buzz is getting louder, and the technology is already infiltrating agriculture.

Initially, we’re seeing this technology make an impact in removing expensive and slow middlemen out of transactions, (like banks and traders), but it’s also creeping into farm gate-to-plate traceability platforms. Startups, of course, are the prime movers in this space as they’re not unencumbered by traditional, older inefficient systems or those that rely on central control.

It’s no surprise that the blockchain technology is making tracks in grain transactions, but in time will it hit the red meat sector too? The system enables faster, cheaper and more transparent transactions, so it seems inevitable; but remembering, those that make up much of the supply chain, post farm gate, thrive on a lack of transparency… that’s where they make their margins. So the incumbents will see the technology as a threat in many ways and will probably try to choke it out. Self preservation at its finest!

Exactly what IS blockchain?

However, with all the hype around blockchain, the fact is that most people I meet still don’t really understand what it actually is, so I’ve put together the following to help you better understand.

To set the scene, a blockchain is a system, not a startup or business, and that system makes up the platform for others to build on their desired applications. Think of it like an internal combustion engine, it’s a system that in time has been used by a number of people and companies in a number of applications to power a result or process. And like engines, there is more than one blockchain.

“The Blockchain” is usually referring to the one that is used by Bitcoin (the first digital currency “cryptocurrency” that uses the blockchain system to transact). I’m sure the first internal combustion engine was called “The Engine” or something, but in time, other engines, based on the same system, were created for different applications (diesel, rotary, jet etc).

However, many systems we use in life we do not understand (think of your mobile phone’s operating system as an example), but people are still very eager to get their head around a blockchain. It’s too wide and deep for this one article, so research away. But here is a very short and sharp description of one application.

Using the money/banking application of a blockchain as an example, you would hold your own special code, like a key. This key is not known to anyone else, no institution or person. Only you can access your account with this key.

However at this bank or money holding/transacting system, everyone can access the whole ledger of accounts. So all transactions between everyone are transparent, for everyone to see. The outcome of this is that there is absolutely no way anyone can muck around with the numbers without anyone noticing.

Although all transactions are transparent and everyone can access the ledger of accounts, it’s all been mixed up with public codes, so nobody knows who owns what. Your identity and secret key are only known by you. So ledgers can be checked and validated by others on the system, without blowing anyone’s privacy.

Ag startups having a crack at Blockchain

In our ag sector, there’s no shortage of Aussie startups having a crack at blockchain.

Agri Digital and AgriChain are two commodity trading blockchain businesses which have already raised significant funds. Agri Digital uses a cloud-based management platform to make the supply chain simpler and easier from farmer to consumer; in 2016 they completed the world’s first sale of wheat on a blockchain by a farmer to a buyer.

Similarly, AgriChain uses a mobile and web app for farming and logistics operations like business admin, and automates and verifies transactions in real time as they take place, using blockchain.

Meanwhile, Fresh Supply Co uses blockchain technologies to manage the export process and sales of agricultural commodities from Australia to China, where traceability is not only a unique selling proposition, but it also protects the food from counterfeits and tampering.

So when it comes to agriculture, there is and will increasingly be more ways we can transact using blockchain. Think of all the middlemen, lack of transparency and margins that sit between your front gate and the consumer’s plate. It’s another huge opportunity for startups to tackle or larger businesses to move into now they have a system that can underpin the move.

Sam Trethewey is from a farming family and has worked across Australia and overseas on most major commodities including beef, wool, lamb and cropping. He co-founded SproutX, Australia’s first and largest agtech accelerator and investment fund where he spent nearly three years developing an ecosystem of support for agtech startups. He has been a regular commentator on agriculture through print, radio and online and has recently started his own food production company whilst also working as Head of Brand for Redhanded, a rural and regional communications specialist.