Crops in space: Aussie ingenuity could feed astronauts on missions to Mars HIGH-TECH crop monitoring and production systems developed in Australia could soon be providing the vital, self-replenishing, on-board food supplies that will be needed to sustain astronauts on future space flights to distant planets.

The University of Southern Queensland (USQ) is developing an autonomous, crop production chamber that could be incorporated into the space craft that United States space agency, NASA, will be using on its forthcoming mission to Mars.

There isn’t the capacity to take enough food from Earth for the three-year, round trip, so mission planners will be looking for an on-board system that can produce food throughout the journey.

University of Southern Queensland (USQ) Centre for Agricultural Engineering (CAE) director, Professor Craig Baillie, said for the past 12 months the centre had been embarking on a program around space agriculture.

“This came out of conversations with some colleagues from NASA, particularly the Kennedy Space Centre. Within the Institute for Advanced Engineering and Space Sciences here at USQ we had some connections to the space sector through work we were doing in our hypersonics group and astrophysics group,” he said.

“It was a really good opportunity for us to reach out and identify other areas across our institute where we could engage with the space industry.”

Professor Baillie said one area of connection that emerged in conversations with colleagues at NASA was their interest in space agriculture.

“In particular, one of the challenges the space industry has in terms of going the longer-distance missions such as from the Moon to Mars is that you are in space for a long period of time, up to three years for a return mission to Mars,” he said. 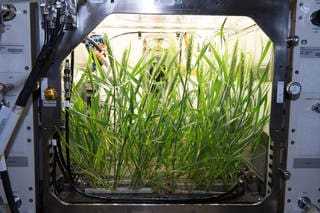 “One of the challenges with that is that you can’t take enough food to sustain a flight crew over that time, which is a limitation on how long you can travel for. So, the concept is that as you want to go on those longer-distance missions you have the capacity to grow food in space.

“The concept is no different to some of the earlier explorers as they departed England or Europe. How far they could travel was determined by how much food they could take, or where they could source food along the way.

“In a similar way, in space we have the same issue. As we are going further and further away we need to be able to solve the food problem.”

Professor Baillie said one of the challenges was that an astronaut was often tasked with something more important than growing food, even though food was important.

“So, it is about developing technologies that can relieve the task and effort astronauts need to grow food for themselves,” he said.

“The area of work we have embarked on is developing systems that can monitor the crops and be able to provide feedback to astronauts in terms of how those crops are performing and whether they are water or nutrient stressed, and how the astronauts can intervene and manage them.”

Professor Baillie said one of the reasons to develop an autonomous, on-board system was that astronauts usually relied on Earth-based crews to provide the expert advice on many facets of the flight.

But as space flights ventured further away from Earth the timelag in communication and the ability to be able to react in real time suddenly started to become a problem.

“So, what we have been doing is use machine vision technology and concepts that we have developed in broadacre cropping systems and apply that to a controlled growth room environment that is transportable into a space environment,” he said.

“The first part of that puzzle is around the monitoring of the plant and being able to provide the early warning signals.

“The next part of the development phase is automating the growth of the crops so the growth chamber can be fully autonomous.

“It is a good example of technology in conventional agriculture and broadacre cropping systems that can be applied to something as cutting edge as space, whether that is monitoring crops or embodying some of the autonomy technologies.”

Professor Baillie said the investment in developing crop-growing systems for space could also be applied in situations on Earth, a pay-off both ways.

“One of the things that is really nice about this project is it allows us to harvest things we have seen in a broadacre cropping system and apply it to cutting edge areas like space. But, similarly, it allows us to apply some of those things back down to Earth as well,” he said.

“Those technologies can be employed on protected cropping systems if you are in a harsh environment where you might be commercially growing crops in glasshouses and automated shelters.

“The technology we have developed can be equally applied to those. Or it could be deployed in broadacre cropping systems that are becoming more intensive and technology savvy.”

Professor Baillie said work at CAE was funded by the Australian Space Agency under the ‘Moon to Mars’ initiative.

The arrangement the centre has with NASA is a collaboration and there is no exchange of funding or contractual arrangements.

“But they are very interested in what we are doing. We have built a relationship which might eventuate to those things down the track,” he said.

“In the project at the moment we have a monthly zoom call where we discuss what we have been doing in terms of what we have come up with and how it applies to what they are trying to do.

“We are very focussed on making sure it is highly relevant to what they are doing so there is the ability to transfer the technology from what we do here at USQ in Toowoomba to the Kennedy Space Centre over in Florida.

“Hopefully it will end up on a space mission to the Moon and Mars.”