Walco director Kurt Walter uses the GoMicro Assessor on a lentil sample at his facility at Halbury, SA. Photo: GoMicro

A MOBILE phone app that visually assesses lentils is available commercially for the first time this harvest to provide growers with a handheld means of determining the grade of their load before they pull up at the sample stand.

Developed by GoMicro, the app is already being used on soybeans by Toowoomba business PB Agrifood, and GoMicro is currently working on adapting the assessor for use on chickpeas, mungbeans and wheat.

Using nothing more than an image database, a white bowl and a phone camera, GoMicro CEO Sivam Krish said the app can objectively assess samples to industry-set standards.

“We can create measurements on the visible side, and we can overcome subjectivity,” Dr Krish said.

Dr Krish said technology is already enabling growers to measure the moisture and protein of grain on-farm, but visual assessment has been a stumbling block, and it can be a major one for the pulse industry.

“AI is a bull in a china shop; it is going to smash through the world of assessment.”

Fly in ball behind bowl

GoMicro describes itself as an optical products manufacturer, and its app is already being used in Asia and Australia on horticultural crops, fish, and spices.

Designed at GoMicro’s facility at Flinders University’s Tonsley Innovation District in Adelaide, the patent-pending technology came about to assess samples of its first subject: the Queensland fruit fly.

Dr Krish said when the pest was detected in South Australia, GoMicro developed a way for growers and citizens to photograph the fruit fly for identification.

“We put a hole in a ping pong ball, and photographed it in there.

“In a ping pong ball, light bounces all the time; there’s no direction of light, and no shadows.”

The grain assessor is the lone accessory which comes with the app, and is a white plastic bowl modelled on the ping pong ball.

Held in front of the phone camera lens and above the sample, it can photograph the subject in even light and with the blandest of backgrounds, and compare it to GoMicro’s growing database of images.

Dr Krish said its methodology was very simple: “We stopped confusing the camera.”

Call from grower, help from grader

GoMicro first looked at lentil assessment at the request of Mark Schilling, a large-scale lentil grower with a registered container-packing facility on the family’s Yorke Peninsula farm.

“He asked us if we could grade lentils.

“Mark visited us and gave us some samples, and then we looked up Pulse Australia standards.” 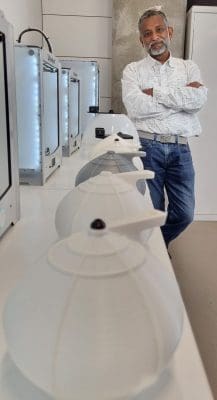 Dr Krish said human expertise was needed to help determine how GoMicro’s visual assessment, taking in both colour and texture of grain in samples, could be commercially relevant, and that came from the company getting in touch with Walco Seed Cleaning director Kurt Walter.

From his base at Halbury in SA’s Lower North, the experienced Mr Walter gave GoMicro the information it needed on grades to allow the lentil assessor to come to life.

In a GoMicro statement, Mr Walter said having a device such as the GoMicro Assessor that can determine the physical quality of grain before and after cleaning was a “huge benefit” to both the seed-cleaning industry and the farmer.

“Farmers often ask for our opinion of their grain sample based on a photograph; using a GoMicro Assessor, we can more accurately predict not just whether the job is possible, but also the final outcome of the grade their grain will be after cleaning,” Mr Walter said.

The GoMicro Assessor is expected to save time and provide more accurate results at Walco by removing the need to manually pick out all defective grains and weigh them.

“AI is so efficient at sorting through grain, it could save us up to 10 minutes per sample, and that in itself is a massive plus.”

Mr Walter said the GoMicro Assessor could be used during harvest, allowing the operator to make adjustments to harvester settings to suit the grain as they reap.

“This could be especially useful this year with the extremely wet conditions, with reports emerging of poor colour and severe wrinkling in lentils.”

Cogeser (Australia) Pty Ltd broker Robert Luetolf said a major issue for his clients is the fear of rejection at receival points, and sees a role for the GoMicro Assessor in making delivery and marketing more efficient.

“This simple yet brilliant solution will help evaluate the risk of rejection without having to drive hundreds of kilometres with samples.” A lentil sample and assessment as displayed in the GoMicro app. Photo: GoMicro

Excessive rain on lentils has a chunk of the early Victorian crop suffering wrinkling, and making it fall below No. 2 standards, but Mr Luetolf told Grain Central that quality prospects appeared to be good in SA overall, and could improve in the later Victorian crop.

“In SA, most should make No. 1s, and some maybe 2s; on the whole, that’s where this tool will be sought after,” he told Grain Central.

On reds lentils, comparable tolerances are 4pc defective by weight, and export standards are 6pc for containers, and 10pc for bulk.

No. 2 red lentils have a farmer-grade receival standard of maximum 8pc defective by weight, with export standards at 9pc for containers, and 14pc for bulk.

The GoMicro Assessor sells for $300, and GoMicro is waiving the four-month subscription at $50/month for the first four months of use.

Dr Krish said the app is evolving further to include snails, a major problem in coastal lentil-growing areas, and marshmallow weed, as evident this harvest after the wet spring.