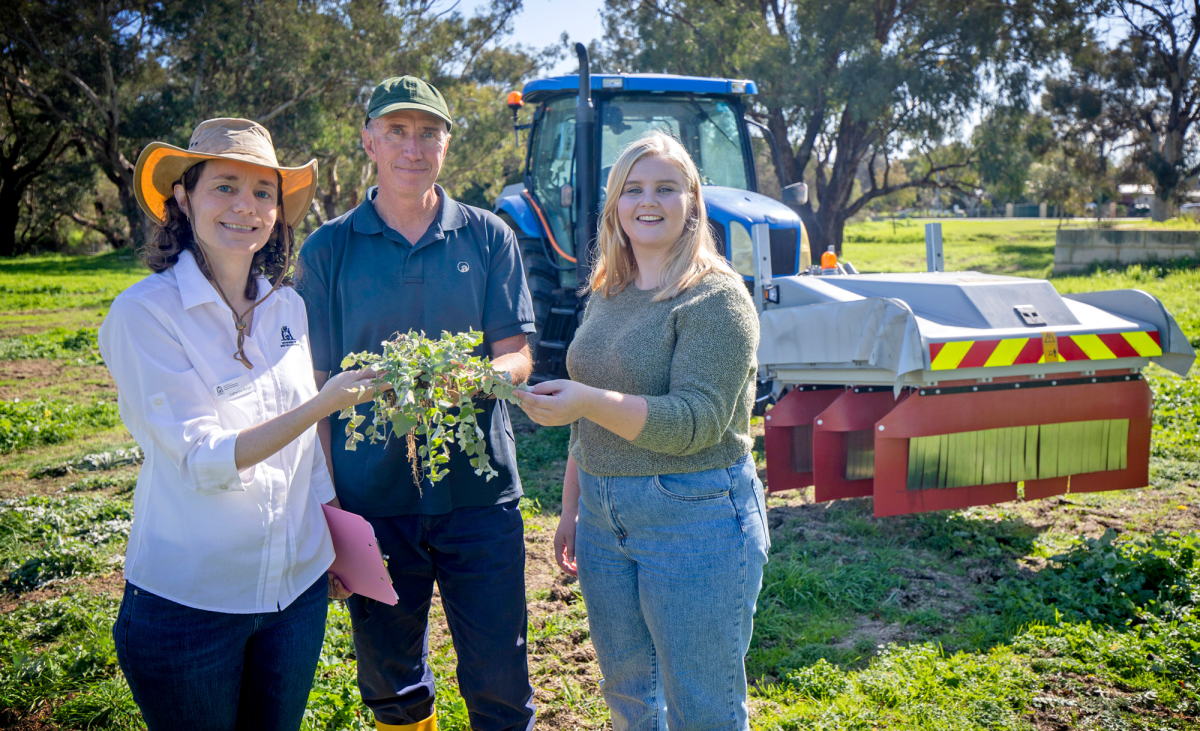 DPIRD research scientists Catherine Borger (left), Dave Nicholson and Miranda Slaven examine some weeds after a passing of the electroweeding machine during a trial at Hamilton Hill Reserve in Bassendean. Photo: WALGA

THE FIRST Australian trials of a device that uses electricity to kill weeds have commenced, as part of a research project to assist primary industries and community land managers to develop sustainable, non-chemical control solutions.

The Department of Primary Industries and Regional Development (DPIRD) is leading the project in association with AGXTEND Europe to test the Zasso Electroherb machine under Australian conditions.

A machine demonstration was recently held for the Western Australian Local Government Association’s (WALGA) Integrated Weed Management Working Group, as part of trials to control weeds in the Town of Bassendean and Shire of Northam.

“The trials at Hamilton Hill Reserve and the Avon Valley Showjumping and Pony Club will evaluate the efficacy of broadleaf and grass weed control after a single pass of the machine, as well as a second pass a fortnight later,” she said.

“The level of control achieved by electroweeding will be compared with glyphosate applications and an untreated control.

“Initial Normalised Difference Vegetation Index, or NDVI, readings of plant greenness showed instant reductions following the first pass of the machine when compared with the control.

“After two passes, electric weed control treatments had a NVDI value half that of the plots with two applications of glyphosate but it is too early to assess final weed mortality.

The electroweeding machine uses mechanical power to produce a high voltage current, which is applied directly to plants via a series of electrodes mounted behind or in front of the tractor.

As the electricity passes through the plant the cell walls are destroyed, killing the plant or supressing growth. DPIRD is leading a research project to examine the application of a high-tech electroweeding device under Australian conditions. Photo: WALGA

“The integrated approach to weed management uses a variety of chemical and non-chemical control methods and Local Government is keen to investigate potential new solutions that can be added to the mix,” Ms Chappel said.

“By working together on initiatives like this, Local Government can help to maintain a healthy and safe environment for our community and wildlife, while providing a cost-effective option to treat target weed species at specific locations.”

Another trial at the DPIRD Northam research field plots will assess the influence of soil moisture on the effectiveness of electric weed control on annual ryegrass, kikuyu and wild radish.

The performance of the machine at various application speeds and growth stages of annual ryegrass will also be assessed in a second trial on the site.

A pathology trial at the Muresk Institute’s property will also explore whether electric weed control can assist in the management of the Rhizoctonia fungus when annual ryegrass is treated.

Later in the year the research will be extended to include small plot viticulture trials in the South West and a trial of interrow control treatments at the department’s Wongan Hills Research Facility of annual ryegrass in a lupin crop.