Why did you choose to adopt precision farming technology?

With highly variable soils and undulation we could see the variability in our soil types and topography, so thought there could be money to be made out of having all of that information saved somewhere. We were early adopters of yield mapping in 1997 when we had a yield monitor retro-fitted to a new harvester. That helped us to see the variability between soil types and the yield correlation which came with it, but we didn’t see any benefits to that initially. We were trying to find out how to make money from yield mapping by soil testing and ground truthing different areas of paddocks. I was a founding member of SPAA in 2002 and in 2005 I completed a Nuffield Scholarship researching the use of precision and conservation agriculture to improve farm profits and the environment. That experience confirmed a lot of what I was thinking regarding precision agriculture and gave me some ways to further explore different technologies.

Which technology tools or components have you adopted and (which do you) continue to adopt?

After yield mapping in 1997 we moved into guidance and autosteer in 2004, which led into controlled-traffic farming in 2005. From 2006 we started to use variable rate for phosphorous, which is something that came out of my Nuffield Scholarship. To do that I take the previous year’s yield map and apply a formula accounting for replacement rates for what was lost in yield plus a factor of loss. We then went into variable rate nitrogen and started using N-rich strips. I scan those with a Greenseeker which gives me an indication as to whether crops do or don’t need nitrogen. More than anything, that tool has given me the confidence not to apply nitrogen and for that reason we have saved money on input costs. A new take on this is a zero-nitrogen strip, which when compared to a crop that has had some early nitrogen, indicates nitrogen deficiency earlier than the N-rich strip.

Another tool I came across on my Nuffield Scholarship was the Yarra N Sensor which in Australia has become the Topcon CropSpec. The crop canopy sensor measures plant reflectance to determine chlorophyll content of the crop, which correlates to nitrogen concentration in the leaf, and hence potentially the nitrogen status and needs of the crop for optimum yield. When used with the N-rich strips and Greenseeker information, we can determine whether the crop requires nitrogen and by how much. That allows us to apply variable rate nitrogen. I also use visual observations and a DJI Phantom 4 drone to help identify areas of low and high biomass from the air which is used for the variable rate nitrogen algorithms.

We also use the drone to help with weed management. We have some herbicide resistant ryegrass and wild radish in patches, so I identify those areas with extra biomass using the drone and zone them out to cut for hay or to spray them out. If it is an ongoing problem, we will use variable rate to increase the seeding rate in those problems areas and use crop competition to help stop weed seed set with crop competition.

What are the factors that motivate you to adopt and use each of the different tools or PA components?

Initially it was ad hoc and I didn’t know what I was doing. We were collecting a lot of data to identify variability among the different soil types, but we didn’t come up with anything to make money out of using that technology. Now it’s a completely different approach. My Nuffield Scholarship pointed me in the right direction. Now I have a four-stage approach — identify the problem, determine what the agronomic impact is, identify whether there is there a PA tool to fix the problem and what it is, and then decide whether it is economical to implement. Rather than looking at every tool and working out how we can make money from it, we use the problem to adopt a tool. That’s how we make money.

What types of data and information are you collecting to guide your decision-making to adopt or not adopt each PA component?

Yield maps and the associated data is the most important data to collect – it is the end point of the season and tells you where the problems are that require further investigation. We use that data for phosphorous replacement and we can use variable rate to apply phosphorous where it is most needed. 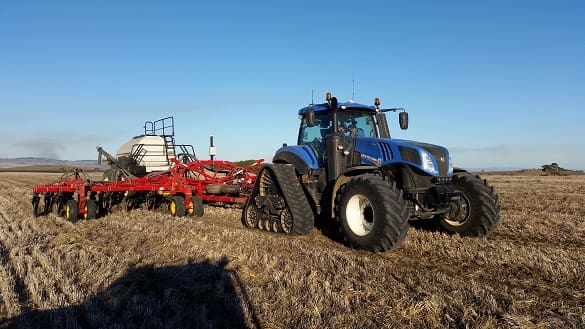 Has the adoption of PA increased profitability on your farm? How?

Yes, it has. I’ve done an economic study on PA tools on my farm which I have presented on at conferences. In terms of savings across the farm per year, our yield savings over the top of the normal background trend are $7.87 per hectare per year and with RTK guidance there is a further saving of $7.24/ha/year through more accurate placing of inputs. We are saving $16/ha/year on phosphorous, $33.78/ha/year on nitrogen, $15.38/ha/year on gypsum and lime, and $7.17/ha/year on weed control. Added up, that is a saving of $87.42/ha/year. For costs, assuming machinery lasts for 10 years is $12.22/ha/year for machinery and technology across the whole farm, my time is $2/ha/year, RTK is $0.17/ha/year so the total costs are $14.39/ha/year. That gives us a profit of $73.03/ha/year, so it is a significant figure.

I think about practice change as going through some simple steps. Firstly, what is the agronomic problem and is it spatial or across the board? If it’s spatial then can I permanently fix the problem with deep ripping or in another physical way? Is it economical to deal with it? If I can’t fix the problem permanently then what are the tools available to help manage it and is it economical to do so? I then look at all the tools available to fix the problem and do the research, then adopt it if it’s spatial and economical to do so. I keep reviewing new tools when they become available to see if they could fix an existing problem. PA is all about solving agronomic problems, not buying trendy tools or services just for the sake of it.

Who is influencing or assisting you with the adoption of PA?

My Nuffield Scholarship has been a big part of it. Research organisations such as CSIRO and the University of Sydney, as well as extension organisations such as SPAA, have also been strong influences for me. Through the Society of Precision Agriculture Australia (SPAA) I am able to talk to other like-minded farmers adopting PA. Machinery and technology manufacturers are also an influence, but it is important to do your own research before adopting what they are selling.

Are you planning to adopt more or less of these various precision farming technology components in the future?

There is nothing on the horizon I can see at the moment which would be beneficial to us. In terms of adoption, there is the classic case of the drone. When that technology became available and I determined that it was economic to use, it overtook the other tools I was using, such as satellite maps. There is a lot of satellite technology around at the moment, so if I find one of equal accuracy to the drone and it is cheap enough to use then that might overtake the drone. This case study was supported by SPAA through funding from the South Australian Grain Industry Trust Fund as part of project SPAA118 – Conversations with Farmers: Agricultural Practice Change with the “PA-Early Adopters”