Satellite technology to boost the future of farming “During the SBAS trial over the past 18 months, researchers have been able to test the benefits of making accurate and reliable positioning data available across all of Australia and its maritime zones. The accuracy of positioning data improved from five metres down to just 10 centimetres.

“In the case of farming, the research has demonstrated more accurate and reliable positioning data has the potential to reduce costs and increase production.”

Minister Canavan was speaking from SwarmFarm Robotics, a business based in the Emerald region that specialises in high-tech farming equipment and systems.

SwarmFarm was one of the farms used to test SBAS equipment, along with properties at Caboolture in south-east Queensland and Ballarat in Victoria.

Member for Flynn Ken O’Dowd said the higher accuracy positioning data could be used to guide machinery for seeding, fertilising and spraying crops with reduced overlap. 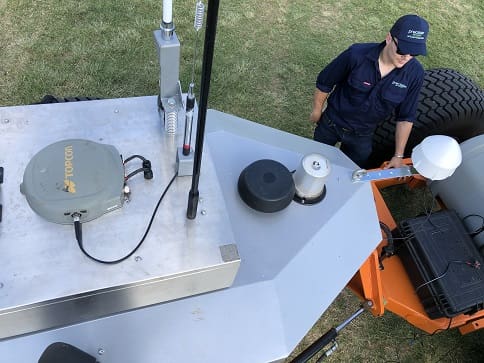 “Accurate and reliable positioning data transmitted via SBAS enables tractors to be precisely guided along designated paths, with obvious benefits for efficiency and cost savings.

“However, the project has demonstrated not only the potential application of SBAS technology to controlled-traffic farming – and the soil health benefits that come with that – but also the potential benefits for other industries with similar operating environments.”

The project was funded through Geoscience Australia and conducted by Independent agriculture research organisation Kondinin Group.

It is one of 27 from across 10 industry sectors developed as part of the trial of a Satellite-Based Augmentation System (SBAS) for the Australasian region, funded by $12 million from the Australian Government and a further $2 million from the New Zealand Government. More information about SBAS in Australia is available at: www.ga.gov.au/sbas