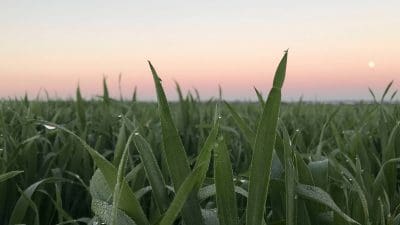 ABARES executive director, Steve Hatfield-Dodds, said well below average production is expected in New South Wales and Queensland because of unfavourable seasonal conditions in most cropping regions in these states.

“The very poor conditions in most cropping regions in NSW and Queensland have been partly offset by forecast above-average yields in Western Australia, following favourable rainfall in late autumn and winter,” Dr Hatfield-Dodds said.

“Overall, this has resulted in ABARES revising down our current forecast by 12pc from the one we published in June.”

Dr Hatfield-Dodds said while crop prospects fell over winter in many cropping regions, national winter-crop production was expected to be significantly higher than previous years, when all cropping regions were drought affected.

He said forecast crop production in Queensland and NSW was only 9-12pc above the lowest levels of the past 20 years.

“However, with good conditions elsewhere, the national crop is almost double the lowest national production in the last 20 years, and 9pc below the 20-year average.

In Western Australia, timely rainfall in late autumn and favourable winter rainfall increased soil moisture levels and ABARES said yields were expected to be above average.

In South Australia, timely rainfall in August has boosted yield prospects in most southern cropping regions, but unfavourable seasonal conditions in the north have reduced their yield prospects.

“Timely rainfall in early spring will be critical to ongoing crop development in many cropping regions in the eastern states and South Australia because of low levels of soil moisture.

“In Western Australia, favourable spring conditions could boost production beyond that being forecast.”

Winter-crop forecasts for the crop nationally include:

Based on a buoyant price outlook, barley planted area rose in all states except NSW and Queensland, where a largely woeful start to the season stymied planting intentions for many growers.

However, the barley harvest in eastern Australia, along with supplementary tonnage from Western and South Australia, will easily satisfy consumer requirements for both malting barley and feed.

NSW canola area is also down markedly due to the dry and patchy start in all but the southeastern quarter of the state’s canola-growing area.

ABARES numbers have confirmed how small the national chickpea crop, produced almost entirely in NSW and Queensland will be.

Queensland chickpea production is estimated at 245,000t, compared with the five-year average of 531,000t, and the previous year’s production of 638,000t. NSW has planted around 10pc of its normal of chickpea area, and production at a paltry 32,000t will reflect that.

Wheat area planted in NSW and Queensland is down by approximately one third, which along with lower yield, will lead to those two states growing around 3Mt of wheat, compared with their five-year average of close to 8Mt.

The willingness of growers to employ practices like deep seeding to seek subsoil moisture, and the planting of varieties suited to dry conditions, means that many growers will be able to achieve commercial crop yields, even if they are well below-average due to drought.

Table 1: ABARES forecasts for key crops in each state planted in 2018, including percentage changes from 2017 hectares planted and tonnes harvested.