Increased stocks of wheat and coarse grains are expected to push prices lower in 2016-17, according to ABARES’ latest quarterly commodity report released yesterday.

The reverse situation – lower stocks and higher prices – is expected for oilseeds and cotton.

The headline forecasts for key cropping commodities are captured in the graphic below (click on chart to view in larger format).

Snapshots of key forecasts from the report include: 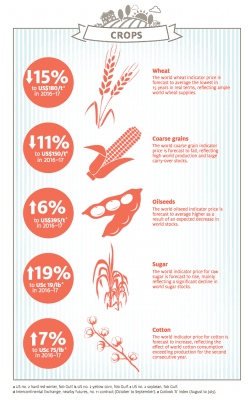 World wheat production is tipped to grow by one percent to 743 million tonnes in 2016−17.

This is based on forecast record average yields, particularly in the USA, Kazakhstan, Russian Federation and Ukraine, which ABARES believes will more than offset a reduced planted area.

Australian wheat production and export volumes are forecast to rise in 2016−17, but the value of exports is set to remain largely unchanged because of lower export prices.

The world indicator price for barley (France feed barley, fob Rouen) is forecast to average 12 per cent lower at US$152 a tonne.

World trade in coarse grains is forecast to rise in 2016–17, reflecting a significant increase in corn exports.

Demand for coarse grains is forecast to increase in 2016–17, but the large volume of carry-over stocks and continued strong production are expected to result in lower world prices.

Grain sorghum production in Australia is forecast to fall by 5 per cent in 2016–17 to 1.9 million tonnes.

Grain sorghum prices were around 30 per cent lower in August 2016, compared with August 2015.

World oilseed and canola indicator prices are forecast to average higher in 2016–17 as a result of an expected decrease in world stocks.

World oilseed production is set to rise, but is expected to remain about four million tonnes short of anticipated consumption.

The world oilseed indicator price (US no. 2 soybean, fob Gulf) is forecast to rise by 6 per cent in 2016–17 to average US$395 tonne. This outlook reflects a second year of lower world closing stocks.

The world canola indicator price (Europe Rapeseed, fob Hamburg) is forecast to rise by 2 per cent in 2016–17 to average US$424 a tonne, largely because of forecast lower world supply. Higher import demand from the European Union is expected to be a significant factor in supporting higher average prices during 2016–17. However, this will be partially offset by lower import demand from China.

The world indicator price for cotton is forecast to increase by around 7 per cent to average US75 cents a pound in 2016–17, supported by relatively tight world cotton supplies for the second consecutive year.

Although world cotton production is forecast to increase in 2016–17, it is expected to again be lower than world consumption, resulting in a further decline in stocks.

The return to Australian cotton growers at the gin-gate is forecast to increase by 8 per cent in 2016–17 to average $554 a bale, mainly reflecting forecast higher world cotton prices.