AS winter crop harvest gains momentum across Australia, growers are on track to produce one of the largest crops on record in a year hallmarked by a massive chickpea crop in the east and exceptional yields and oil content in canola throughout. 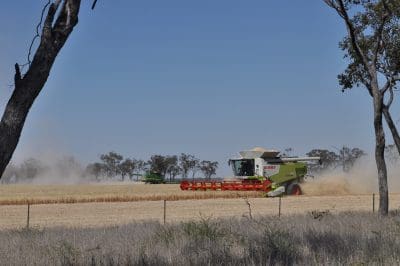 Headers are moving through one of the most promising winter crops on record.

While the season hasn’t been without its challenges of flooding in central NSW, wild storms in South Australia, frosts in Victoria and Western Australia and depressed prices for cereals, farmers are buoyed by above-average production levels across wide reaches of the cropping zone.

In the eastern states where harvest is 3-4 weeks late in most areas due to the cool, wet spring, the majority of the crop is off in Central Queensland as the harvest focus moves southwards to the Darling Downs and NSW/Queensland border areas.

Graincorp reports the first deliveries for northern NSW have been received across the Moree North and Burren Junction zones, with other regions expected to start deliveries this week as expected dry weather allows the crop to ripen.

Only limited deliveries have been received across southern NSW and Victoria so far.

In South Australia, receivals across the state are steadily increasing with more than 402,000t delivered into Viterra’s sites over the past week.

Harvest in SA’s Western Region is in full swing with more than 306,000t of grain received over the past week.

Deliveries slowed at the end of the week due to poor weather conditions.

Lentils have now started coming off in the region, with Wharminda receiving some lentil deliveries last week.

Viterra’s Thevenard site broke its daily receival record three days in a row. A new daily record of more than 14,000t was reached on November 11.

Receivals in SA’s Eastern Region have increased with Alawoona, Pinnaroo, Strathalbyn and Tailem Bend taking their first grain deliveries in the past week.

In Western Australia, harvest is ramping up with slightly more than two million tonnes of grain received on the way to an estimated total crop of 13 – 14 million tonnes.

“This demonstrates just how busy things are up in the northern part of the state. Canola yields in some areas have resembled good wheat yields. This has caught out a number of sites which have not been able to extend hours quickly enough to provide growers with the service they need.”

In the northern farming area, the Geraldton zone has just passed the one million tonne mark, hitting one-third of its estimated three million tonnes.

Harvest is progressing in the Kwinana zone with just over 900,000t delivered, the majority canola and barley, both about 390,000t.

Wheat deliveries commenced at the start of November with 75,000t delivered to date.

“Yields with crops which have not been frosted have been very good across the north of the zone, particularly canola where a number of crops are yielding in excess of two tonnes per hectare.

“As growers move into cereal crops we are starting to see some quality issues in those areas affected by frosts. It’s a bit too early however to get an accurate picture on how much the yield has been impacted.”

Harvest is underway in the southern zones of WA with Esperance starting to see reasonable tonnages and Albany expecting to see more come through this week.

To the end of last week slightly more than 55,000t had been delivered in the Albany zone, of which around two-thirds was canola.

CBH’s Albany Zone manager, Greg Thornton, said frosts towards the end of the growing season were having an impact on quality.

“There have been some quality issues, mainly from crops in the northern parts of the zone, and we are seeing a much higher proportion of canola being segregated into lower grades,” he said.

“We’ve had some barley come through – about 70 per cent of that has been segregated as feed barley. We have also introduced some MALT2 segregations.”

The Esperance zone received more than 310,000t last week, mainly barley and canola with some wheat samples starting to come through.