SCIENTISTS at the Charles Sturt University (CSU) in Wagga Wagga, NSW, have unlocked the secret to crop plants having the capacity to be self-weeding by engaging in a ground-level form of chemical warfare to knock out competing weeds.

While still in its early stages, the research has identified plants that release phytotoxins into the soil to combat competing plants.

The findings have the potential to add a new dimension to the way agriculture looks at weed control. 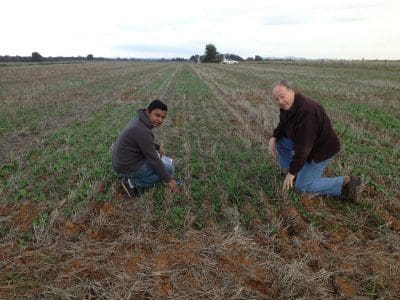 Taken to its full extent, it could herald a future of self-weeding crops that may provide an alternative to conventional herbicide weed control at a time when many important agricultural chemistries are under threat from rising herbicide resistance.

Researchers at CSU’s Graham Centre for Agricultural Innovation have been looking into canola’s capacity to exude phytotoxins to control weeds, particularly annual ryegrass.

CSU research professor of agriculture, Dr Jim Pratley, said the research team had studied a wide range of canola germplasm and had come up with two lines that effectively did their own ryegrass control.

One of the lines not only controlled ryegrass, but a broader spectrum of weeds, including Paterson’s Curse.

Dr Pratley said this year researchers had also conducted a small trial into canola’s capacity to control wild radish and had identified one line that seemed to be effective against the troublesome weed.

Known as allelopathy, the process of plants being able to self-weed involves them gaining an advantage over neighbouring rival plants by exuding phytotoxins into the soil.

These chemicals are mainly from the roots and vary in output and intensity between different plant species and cultivars.

Different chemicals will go out, depending on what the challenge is. And different species will have different cocktails they put into the system.

“So what happens in a crop situation is a crop plant puts out its chemicals, trying to get a competitive advantage. And you have the weeds in return sending chemicals back to try to get the advantage over the crop,” Dr Pratley said. 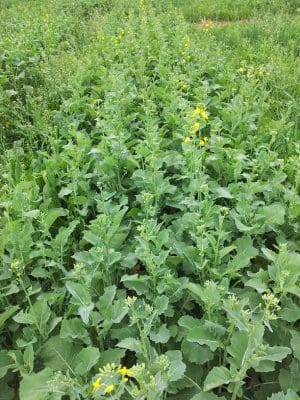 A self-weeding line of canola showing its capacity to exclude weeds. Note the weeds in the background. No herbicide has been used in this crop.

“There is chemical warfare going on and it is survival of the fittest. The fittest will be the one that has the most potency, but also is most tolerant of what comes back to it.”

In addition to plants having the capacity to hinder weeds, Dr Pratley said different varieties of crop stubbles also had different effects on different weeds.

“So if you have a weed problem in a particular paddock you could go looking for a variety that is able to control that weed in-crop, but also have stubbles that inhibit its emergence in the next crop,” he said.

Dr Pratley said while the capacity to self-weed was well known in nature, it had not been harnessed in today’s crop varieties.

“One of the problems is that all varieties are grown under weed free conditions so they are never challenged. So, accidentally, breeders have been breeding this capability out of crop varieties,” he said.

“There is some work that shows the really older varieties have much greater capabilities than the newer ones.”

Dr Pratley said in addition to canola, the self-weeding trait was strong in wheat and rice. Internationally, self-weeding rice varieties were already available in China and increasingly in the United States.

“You will find it in every crop. But we don’t know if the capabilities are good enough to do anything with,” he said.

Dr Pratley said he saw a time when growers would be able to pick and choose varieties depending on what weeds they were trying to control.

But a lot of work needed to be done before that happened.

“What we have done is a lot of screening work and looked at the chemistry involved, but we don’t have funds to keep the work going, so that is one of our challenges,” he said.

“What we want to do is take this through to the identification markers, then hand it over to the breeders so they can incorporate this in with all the other things like disease resistance and quality.

“We would like to think it will become an integral part of breeding. But if we don’t invest in that area it will be a very long time before we will be able to take advantage of it.”

Dr Pratley said one of the key advantages of introducing self-weeding crops was that it would take pressure off existing herbicide regimes that were facing herbicide resistance issues.

“The problem is that if we don’t look for other options, then herbicides, as we know them, will disappear. We particularly want to take the pressure off glyphosate,” he said.

“We have to look at other options rather than have chemical after chemical disappear and we end up with nothing.

“We are trying to work outside the square to give a different option to the one we are so dependent on at this stage.”