A MASSIVE international research effort has led to the development of a genetic model for the ‘ultimate’ chickpea, with the potential to lift crop yields by up to 12 per cent. The research consortium genetically mapped thousands of chickpea varieties, and the team at the University of Queensland (UQ) then used this information to identify the most valuable gene combinations using artificial intelligence (AI).

“Most crop species only have a few varieties sequenced, so it was a massive undertaking by the international team to analyse more than 3000 cultivated and wild varieties,” Professor Hayes said.

The landmark international study was led by Dr Rajeev Varshney from the International Crops Research Institute for the Semi-Arid Tropics in Hyderabad, India.

The study confirmed chickpea’s origin in the Fertile Crescent and provides a complete picture of genetic variation within chickpea.

“We identified 1,582 novel genes and established the pan-genome of chickpea, which will serve as a foundation for breeding superior chickpea varieties with enhanced yield, higher resistance to drought, heat and diseases,” Dr Varshney said.

Professor Hayes said the UQ team used the data to model a chickpea with perfect genetics for seed weight, a trait linked to yield.

“This additional data led to the increase in yield predicted by our model, which is still being fine-tuned,” he said.

“We are using our AI ‘FastStack’ technology platform to design a chickpea with the ultimate genetics for maximum seed weight, and we think this will ultimately be a valuable tool for chickpea breeders.”

FastStack combines AI with genomic prediction technology to identify the combinations of genes most likely to improve crop performance. 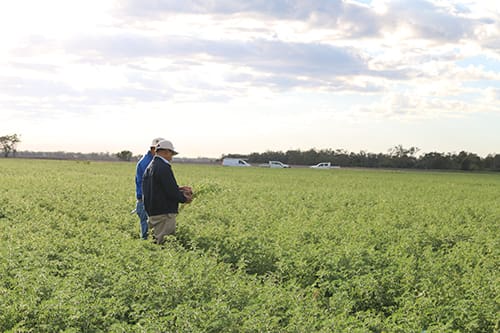 Chickpea is the largest pulse crop in Australia after lupin, both in terms of planting area and production.

It ranks second in area and third in production among the pulses worldwide.

“Improving the productivity of chickpea for Australia offers opportunities for our farmers to supply local food industries and export markets,” he said.

“Using this AI-generated chickpea model for increased seed weight in the field will be challenging, given the number of generations it will take in cross-breeding for optimal chickpea genetics, and the impact of different environments and management practices on crop growth.

“But we do have tools like speed breeding that can speed this process up and allows us to test and put into practice these theoretical scenarios.”