EXPECTATIONS remain for Australian canola production to exceed the five-year average of 3.7 million tonnes (Mt) with its second-biggest crop on record of 5.5Mt, according to the Australian Oilseeds Federation (AOF) July Crop Report.

Wetter-than-average conditions are expected to continue throughout winter and into spring for much of south-eastern Australia and patches of south-east WA, creating a strong outlook for regions with good plant populations.

However, more neutral conditions are expected for south-western VIC and south-eastern SA, which have not experienced above-average rainfall so far this year.

The price of canola exported from WA has eased from the mid-May peak of $1300/t to around $1160/t currently. 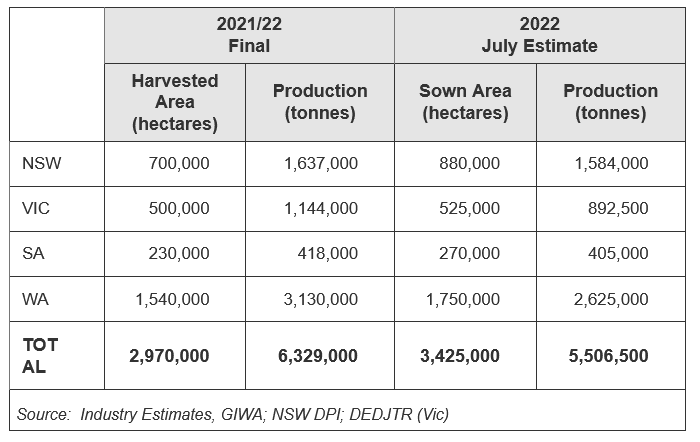 Following is a round-up of conditions by state:

Poor germination, particularly of retained seed, has also been an issue.

Established canola in the region is estimated to be around 50-60 per cent of intended planting, while in the Riverina, around 20pc of crops are compromised by waterlogging.

Severe nitrogen deficiency has occurred in many paddocks, with limited or no post-planting nitrogen management due to a lack of trafficability.

Crop establishment is significantly better in northern parts of the state, with limited areas affected by wet conditions.

Only minor pressure from slugs and slaters has been observed.

Crops in the main canola-growing regions across the s north-east, north-central and south-west Victoria are generally progressing well.

Cold and overcast weather, along with a dry spell, has slowed crop growth over the past two months.

Crops in the Wimmera are good, but require continued rainfall due to variable soil moisture and limited moisture accession this season.

Drier conditions in the Mallee due to limited carry-over soil moisture from 2021 and no significant rainfall events in the past six weeks have stressed isolated crops.

In the Elmore region, recent falls of less than 10 millimetres and timely urea application have lifted crop growth, however, some resistance to applying yield-maximising levels of urea due to easing canola prices has been observed. Insect pressure, including from slugs, earwigs, millipedes, slaters, snails and some mice have impacted many crops in the area.

SA had a later start to the season with average rainfall in May and June but reduced rainfall in July.

Crop growth is varied between districts, but is progressing with reasonable levels of soil moisture.

In the South East, later plantings due to a dry March and April are growing well, but slugs have impacted crops as far north as Bordertown, and into the mid and lower south-east.

Growth in the Southern Mallee is good due to excellent rain in the 2-3 leaf stage which has encouraged growers to apply reasonable rates of nitrogen, some targeting a yield of around 1.5t/ha.

Crops sown south of Giles Corner have had an earlier start than northern plantings, given good early rainfall, and excellent germination has occurred across both regions.

The Upper Eyre Peninsula (EP) had a much earlier start than the rest of the state due to timely rainfall around Easter and Anzac Day.

Establishment has been more staggered and patchier on the Lower EP due to less significant rainfall.

First flowers are emerging across most of the region, while considerable blackleg lesions have been observed on varieties grown in large areas for the past 2-3 years.

The warmest June conditions in 30 years for many canola growing regions in WA have accelerated crop growth beyond stages normally seen at this time of year.

Soil-moisture deciles are very low for most regions due to rapid plant development and below-average growing-season rainfall.

Post-sowing management operations are well under way, and many growers will be finished in the next 2-3 weeks.

Other risks to yield potential include late frosts in the south due to earlier-than-normal crop development, and continuing dry conditions in the north.

However, the outlook for WA remains positive, with production potential still considerably higher than the long-term average.