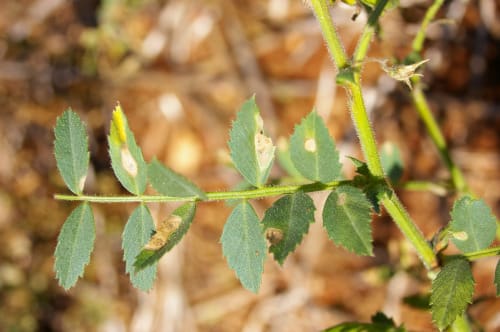 FAR from being eliminated by the long-running dry that has afflicted eastern Australia, the damaging fungal disease, Ascochyta blight, still poses a significant threat to the 2019 chickpea crop, according to New South Wales Department of Primary Industries (DPI) plant pathologist, Kevin Moore.

Dr Moore said the disease could still be a problem in chickpea crops this winter because the long dry has meant crop residues that host the disease’s inoculum had not broken down between seasons.

Inoculum loads are still present on the stubble, waiting to flair in-crop.

“Because there have been dry conditions for the last few years, that inoculum, some of it originating from the big Ascochyta year in 2016, is still viable,” he said.

“Last year where I found Ascochyta was in paddocks that either had chickpeas in 2016, or the 2018 chickpea crop was next to a 2017 chickpea crop.

“There is a lot of seed from the 2017 harvest that didn’t get planted last year and most of that is kept on-farm.”

Dr Moore said seed should be assessed for quality and tested for germination and emergence before being used for planting.

He warned that growers could unwittingly be holding contaminated seed from a range of sources.

“Seed can be contaminated through the harvesting or handling process. If you are using a contract harvester from Victoria that has been harvesting chickpeas that are full of Ascochyta in the Wimmera, even though you have had no Ascochyta in your current crop, that header can inoculate your grain, so you need to treat it with seed treatment,” he said. Once the crop is up and growing, Dr Moore said the key to managing Ascochyta in-crop was to apply fungicide before rain.

“Traditional fungicides are persistent on the plant and are quite robust. If you are unfortunate enough to miss an Ascochyta spray, recent research suggests you may have options for post-rain fungicide application. But do not rely on salvage fungicide options as part of your Ascochyta management program,” he said.