THE United States Department of Agriculture (USDA) crop report for October estimates 2016/17 Australia wheat production at 28.3 million metric tons, up slightly from last month and up 16 per cent from 2015/16. 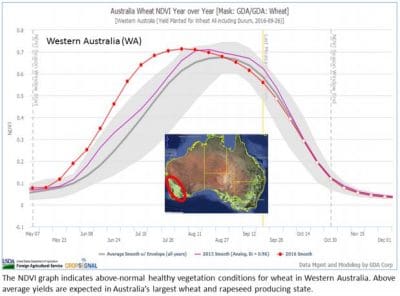 The report says there have been good growing conditions for both crops during early September with precipitation above average since sowing operations commenced in May. Soil moisture in virtually all rapeseed and wheat cropping areas has markedly improved from the relatively dry conditions which prevailed during much of the previous year.

Field conditions are considered near ideal in most regions with the exception of localised losses resulting from flooding in southeast Australia and frosts in Western Australia. 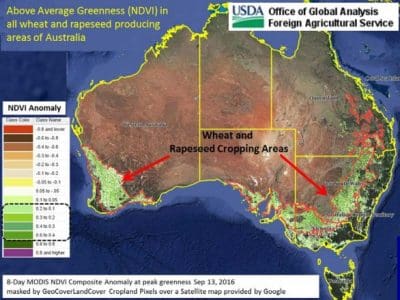 Yield is forecast at 1833 kilograms/ha. Yield is expected to decrease because of a forecast increase in the share of the total area sown to dryland cotton.

On average about 90pc of Australia’s total cotton production comes from irrigated areas.

This will be the first time in three years that a significant area has been planted to dryland cotton.

Dryland planting tends to vary with seasonal weather forecast and prices at sowing.

Also, higher cotton prices relative to sorghum will shift sorghum area to cotton in Queensland and northern NSW where these crops compete.