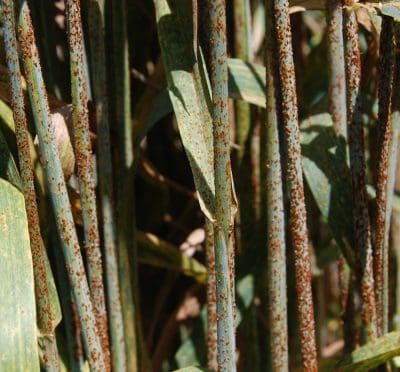 WHEAT provides about 20 percent of humanity’s food, but the recent re-emergence of stem rust has posed an increasing threat to food security.

Now, in a world-first breakthrough to be announced tomorrow in two companion papers in the journal Science, scientists have isolated the very first rust pathogen gene that wheat plants detect to ‘switch on’ resistance.

Stem rust has devastated crops in some parts of the world because of its ability to evolve, undoing much of the hard work that began in earnest with the Green Revolution.

The developments enabling scientists to get a clear understanding of what is happening at the gene and protein levels occurred for the first time by coincidence in parallel research groups led from Australia and at Kansas State University in Manhattan. The collaboration includes the University of Sydney, CSIRO, UK’s Rothamsted Research and the University of Minnesota and USDA in the United States.

The breakthrough in research targeting stem rust, historically the most dangerous pathogen of wheat, will mean suspect samples could be analysed within hours in an emergency rather than weeks, potentially saving crops from being destroyed.

“For the first time it will be possible to do DNA testing to identify whether a rust in a wheat crop anywhere in the world can overcome a rust-resistance gene, called Sr50, which is being introduced in high-yielding wheat varieties,” said Professor Robert Park, corresponding author from the University of Sydney.

“This will indicate whether or not a given wheat crop needs to be sprayed with expensive fungicide quickly to protect against rust – which would otherwise devastate the crop in a matter of weeks.”

Video explainer: Click to watch animated video explaining how rust disease invades and affects plants, and how some plants have an inbuilt resistance that allows them to survive attack.

Rust disease epidemics have emerged at times in tandem with carefully refined selective breeding in cereals; the disease is once again extremely damaging in East Africa and is making a comeback in Europe.

Jiapeng Chen, a PhD candidate from the University of Sydney who initiated the work by sequencing and analysing the genome of a virulent rustisolate, said this was the first important step in addressing the diagnostic challenges posed by ever-changing fungi, which result in new rust pathogen strains.

Professor Park explained: “It’s like an ongoing arms race – we’ve got to keep one step ahead of this changing pathogen.

“The last major epidemic of wheat stem rust in Australia alone, in 1973, caused $AU300 million in damage – imagine what that would be today.”

Co-corresponding author, Dr Peter Dodds from the CSIRO’s Agriculture and Food team, said demand for wheat in the developing world was expected to jump 60 percent by 2050 and in economic terms alone the ramifications were huge.

“Our results so far show the plant immune system is able directly to recognise the fungal protein, said Dr Dodds. “We are gaining a better understanding of the whole process – what’s going on at the protein level, at the gene level.”

Co-author Dr Kostya Kanyuka from Rothamsted Research, an agricultural science centre in the United Kingdom, said stem rust had been making a comeback in Europe, for example in Sweden as recently as this year, and was threatening Asia and the US.

“The highly virulent Ug99 race of the stem rust fungus – which emerged in 1998 in Uganda – has become even more potent as it has spread through Africa and the Middle East, with winds threatening to carry it into Asia,” Dr Kanyuka said.

US collaborators Professors Melania Figueroa and Brian Steffenson from the University of Minnesota and Dr Yue Jin from the US Department of Agriculture, extended the results of the study by examining strains of the stem rust pathogen from other parts of the world, including the US and Africa.

“It is important to look at this gene in worldwide rust strains to gain a picture of where virulence is most likely to evolve,” Professor Figueroa said.

Professor Park, from the Plant Breeding Institute, part of the University’s Sydney Institute of Agriculture and School of Life and Environmental Sciences, said the results should also lead to a better understanding of how rust pathogens infect wheat, evading detection by the wheat plant, and causing yield losses.

“In addition to the immediate practical benefit regarding the important rust-resistance gene Sr50, our world-first finding could potentially have a longer-term payoff in the 10-15-year horizon,” he said.

Australians have been breeding for resistance to rusts and studying how they evolve for 95 years but this is the first time scientists have been able to look down at the gene level.

Researchers used new technologies and techniques – including whole-genome sequencing that decodes DNA, and computer bioinformatics that allow the vast amounts of sequence data generated to be analysed.

A key element of the research was carried out by PhD candidate Mr Jiapeng Chen, partially funded by the University of Sydney through the affiliated Judith and David Coffey Life Laboratory in the Charles Perkins Centre.

Work in the Commonwealth Scientific and Industrial Research Organisation (CSIRO) supported by the philanthropic TwoBlades foundation used model tobacco plants to identify a candidate fungal gene identified by Mr Chen as the likely avirulence candidate of the resistance gene Sr50. However, it needed confirmation of this hypothesis in wheat.

Rothamsted then developed a virus-based system that can deliver alien proteins inside wheat cells, known as virus-mediated overexpression of heterologous protein (VOX) and tested it on proteins from the candidate gene in wheat with Sr50.