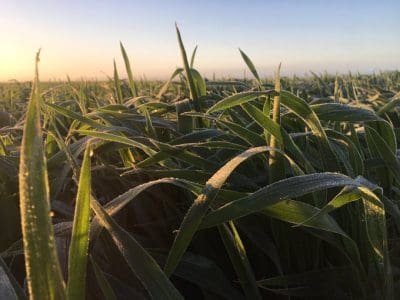 THE ANNUAL Pro Farmer Crop Tour was conducted across seven of the most important corn and soybean states in the United States last week. The results were released after the markets closed on Friday and, as most market pundits expected, came in lower than the recent USDA production estimates.

One key observation from the tour was the maturity of the corn crop. Many scouts put it up to three weeks behind the average for this time of the year in the regions worst affected by the delayed sowing. The eastern reaches of the corn belt were the worst affected, but the crop certainly improved in quality and maturity as the tour moved west.

The forecast for cooler weather in coming weeks will slow the maturity of the crop even more. With autumn fast approaching, the days are getting shorter, and the average daily temperatures are on the decline. This raises the concern of early frosts and the potential impact on final yields.

Here in Australia, spring is almost upon us. As the days get longer and average day temperatures increase the evapotranspiration rate of each plant rises significantly, increasing moisture demand of the maturing crop. The possibility of frost also becomes a significant production risk as the crop moves into its reproductive phase.

Rainfall last week has continued the hand-to-mouth pattern evident across most of Victoria, South Australia and Western Australia this season. The falls were generally less than 10 millimetres with most of the more marginal cropping regions receiving less than 5mm. New South Wales didn’t fare as well with some minor falls limited to districts south of the Murrumbidgee River. Central NSW, northern NSW and all of the Queensland cropping areas received absolutely nothing.

Victoria is the pick of the states at the moment, with forecasts suggesting average to slightly above average production. All but the north-west corner has received at least 25mm of rainfall so far this month. That said, the picture is not uniform across the entire state. There are parts of the Western Districts that are too wet and conversely a significant portion of the Mallee is starting to struggle due to lack of in-crop rainfall.

In SA, it is also a tale of two stories. The South East, lower Mid-North, lower Yorke Peninsula and the lower Eyre Peninsula are all tracking along quite nicely, but the more northern production areas have only been catching the edge of each change and have been struggling for almost the entire season.

Primary Industries and Regions South Australia (PIRSA) released their latest crop estimates last week with the wheat crop currently estimated at 4.8Mt and barley at 2.2Mt. This would appear to be extremely optimistic based on the current state of the crop.

In WA, most grain growers are in the game but, overall, the crop is running around three weeks behind average. The crop went in on time, but most of it was dry sown. The break didn’t come until late in the first week of June, so germination was delayed accordingly. Canola appears to have lost the most potential with poor germination in many paddocks and flowering running very late, especially in the Kwinana and Geraldton zones.

Southern NSW is starting to feel the pinch. Most of the crop south of a horizontal line through West Wyalong was planted, but rainfall registrations in most regions have been well below average through July and August. The crops in many areas are showing signs of stress and production potential is falling quickly.

Save for a few isolated areas, crop prospects in NSW north of that line are a disaster. Much of central and northern NSW have had less rainfall year-to-date than at the same time in 2018. Southern Queensland is no better. Less than 30pc of the crop was planted, and less than half of that still has some prospect of harvesting more than next years seed requirements, assuming adequate spring rainfall is forthcoming.

The big outlier across the entire country this year is the size of the area that will be cut for hay. In WA, livestock producers have been forced to feed for a much longer period this year as the break came late and ensuing pasture growth was slow. Reserves have been depleted as a result and growers will be looking to restock.

The situation in the eastern states is far more dire. It was dry across all eastern states last year, and hay stocks were not replenished last spring. Back-to-back droughts in central and northern NSW and southern Queensland has sustained hay prices at extremely high levels for an unprecedented length of time.

For those doing the calculations, the high prices are certainly providing a significant incentive in many regions to minimise production risk by cutting their crops for hay rather than carrying through to harvest. This is especially the case where the crops are already under moisture stress and potential grain production is decreasing.

The entire Australian winter crop area is currently behind the eight ball in terms of year-to-date rainfall. While the drought area on the east coast is currently less than what it was last year, much lower production prospects in WA and high demand for hay across the entire country means that above-average rainfall and a kind spring will be required to ensure that this season’s domestic winter crop production exceeds that of 2018/19.