NORTH West NSW farming manager, Jim Mitchell, has won his fourth Premer Shield sorghum award in the same year he marks 30 years with the Romani Pastoral Company’s Mandeville property at Premer on the Liverpool Plains. His previous wins were in 2001, 2006 and 2007. 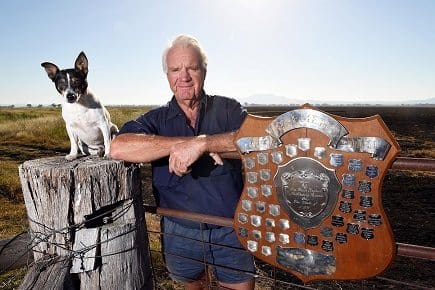 Mr Mitchell won this year’s award with a crop of MR-Taurus estimated by a judge to yield 8.5 tonnes per hectare.

He said sorghum was an important crop for the region and particularly for Mandeville because it produced grain in any season and fetched a solid return at harvest.

“We run a traditional, reliable cropping program,” he said.

“Primarily in summer it’s sorghum and in winter it’s bread wheat and dual-purpose wheat.  We don’t dabble in alternative crops because of the fluctuations in yield and price.

“I think the best trial is to grow a sorghum variety over five or 10 years in good, bad and indifferent seasons, and if it still produces grain, you’re onto a winner.

Mr Mitchell said the 2017-18 summer was a tougher season than usual, characterised by cold sowing conditions and lower than average growing season rainfall.

“It comes down to the right timing, crop choice, long fallows, row spacing and fertiliser program, and being in an area with the cooler night conditions and summer rainfall helps too.”

“The 218 millimetres of in-crop rain wasn’t much but it was well-timed.”

The fertiliser program consisted of 50 litres/ha of liquid starter fertiliser and 130kg/ha of Big N gas.

Working in the grower’s favour, however, was a well-timed paddock rotation.

“The Taurus block came out of long fallow dual purpose wheat, and in these marginal years it helps to have a full profile of moisture, whereas Buster was sown sorghum-on-sorghum,” he said.

“The paddock was grazed by 600 Angus steers for seven weeks and then closed off and harvested at 5t/ha in December 2016.

“When sowing 11 months later, we didn’t encounter the same straw problem resulting from the wet winter that a lot of farmers were contending with.”

The sorghum was harvested on April 7 and the grain was sold and delivered to Graincorp Premer for $304/t soon after.

According to Mr Mitchell, his four competition wins could be attributed to a number of factors.

“It comes down to the right timing, crop choice, long fallows, row spacing and fertiliser program, and being in an area with the cooler night conditions and summer rainfall helps too,” he said.

“Contractors are used for planting, spraying, harvesting and carting and we don’t have on-farm grain storage, so this lets us put more money into infrastructure like fencing and water.”

Mr Mitchell is supported by one other permanent staff member, with casual workers making up the rest of the workforce. 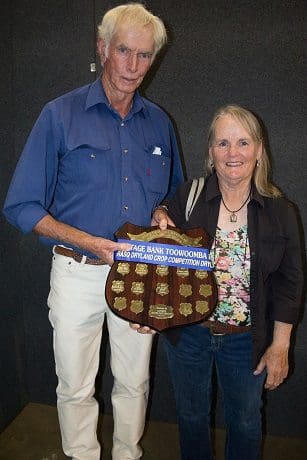 Darling Downs growers Phil and Chris Moar won both the dryland and irrigated sorghum titles in this year’s Queensland competition.

Their irrigated crop of MR-Scorpio grown on their farm at Pilton south of Toowoomba scored 170 points and their dryland MR-Scorpio received 152.6 points.

The Pacific Seeds variety yielded 9.932t/ha under irrigation and 9.44t/ha in rain-fed conditions.

Following the Moars in the irrigated sorghum, Bruce and Roslyn Vonhoff from Bethel, Pittsworth, took home second and third for their crops of MR-Scorpio and MR-Apollo which yielded 9.438t/ha and 8.809t/ha respectively.

In the dryland sorghum category, second place was claimed by Peterson Farming Co from North Branch, with its crop of MR-Taurus yielding 8.512t/ha.