Barley battered by lodging and disease

BARLEY growers in the rain-soaked regions of NSW and Victoria are battling widespread crop lodging and late season disease outbreaks. 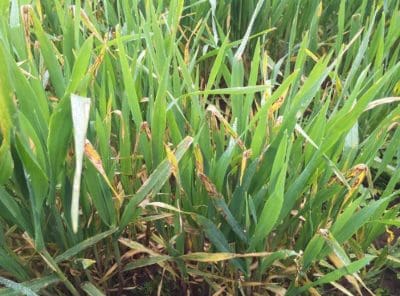 Yellowing and dying leaves in a barley crop hit by scald infection.

“There has been lots of rain and they are just falling over. There are a lot of thick crops with thin stems,” he said.

“It is happening reasonably early. The crops are only flowered or just past it.

“The effect it will have on yield and quality is unknown. Sometimes crops stand back up, but if they have gone down early the chances are it could cause small grain and lower yields.”

Dr Fettell said it was also likely to be a year when barley protein levels were lower than average.

“We could see barley that is under nine per cent protein and too low to malt. So the quality issues are going to be small grain, screenings and low protein,” he said.

“It is too late to do anything about soil nitrogen levels. There were a lot of crops that were nitrogen deficient because of the high yield potential and because people couldn’t get spreaders on the paddocks and trucks to airstrips to fly it on because of the wet conditions.”

The leaf disease, barley scald, and to a lesser extent spot form net blotch, have flared in many areas, but have been particularly severe in southern NSW. 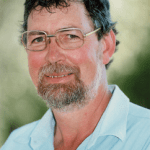 Dr Fettell said there were more scald outbreaks in barley crops in the southern half of NSW than he had seen for many years.

“It has come in a bit later than usual. It has been exacerbated because in places where it has been wet a lot of people only have aeroplane access to put fungicides on,” he said.

“The other issue for growers is the barley price isn’t very flash. So people are doing their sums very carefully as to how much is worth spending to control scald.

“It is a hard decision. It depends on how late (the disease) came in, how far the crops were into filling, whether they can get onto the paddocks to do anything about it and whether the economics add up.”

Delta Ag senior farm consultant and director, Tim Condon, Harden, NSW, said barley scald was typically a disease that impacted on crops through winter and dissipated in spring, but this season conditions had been ideal for it to kick on and be a problem later in the season.

“We have not had an issue with it with the run of dry springs we have had, but this year it is an issue,” he said.

“Growers often use a one-spray preventative strategy but this season they are looking at two sprays.

“The crops have enormous potential and we want to fill them up. To get malt grain we want to make sure we have good quality grain, so we don’t want diseases like scald ripping the leaves off the crop at the end.”

Barley scald is a fungal foliar disease that can cause grain yield losses up to 45 per cent and reduce grain quality.

Most varieties have some level of susceptibility to the disease.

The first signs of scald are bluey-grey green blotches on the leaves which may start as hotspots and rapidly spread. Blotched, yellowing and dead leaves will ultimately appear throughout the crop.