THE adoption of summer pulse crops in the northern farming region is relatively low despite the potential environmental and economic benefits, particularly in the Queensland grains region where they account for just four per cent of total cropping. 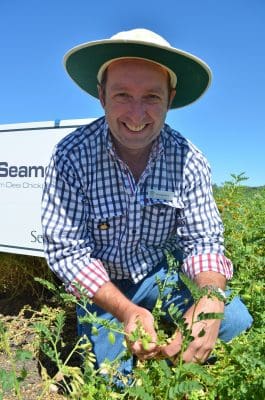 To increase diversity into the cropping system, the Grains Research and Development Corporation is funding research to develop strategies to enable growers to more consistently realise the potential productivity and profitability of pulse cultivars in their farming systems.

Queensland Department of Agriculture, Fisheries and Forestry (DAF) senior extension agronomist, Kerry McKenzie, who is part of the Pulse Agronomy Project, said the research into summer pulse agronomy strategies not only aimed to get an increase in yields for summer (and winter) pulses, but to also improved the reliability of yields.

“When the risk in reliable yields in varied environments and seasons is reduced, then pulses will not just be considered as a break crop in a cereal rotation or as an opportunistic cash crop but rather as a crop that can be considered a reliable and profitable part of the farming enterprise,” he said.

“Mungbean prices for example have risen and remained high in recent years, resulting in an increased interest in growing them, with new growers considering trying them for the first time, previous growers returning to growing and growers who regularly include them in their cropping programs looking to maximise the crop’s yield.

“With mungbean yields averaging around 1t/ha in southern Queensland and a long term price of $750/t, an increase in yield of 10% could mean an extra return of $75/ha.  Across a growing area of approx. 40,000ha this could mean an additional $3 million of returns to growers.”

The Pulse Agronomy Project has consulted widely within the pulse industry to determine the priorities to be investigated throughout the term of the project.

“It may seem common sense, but it really does pay to go back to basics and consider factors including paddock selection, good soil moisture, herbicide residues, soil nitrogen and soil constraints,” Mr McKenzie said.

“Beyond that, we have looked into row spacings in particular, as mungbean yields can be improved by planting at narrower row spacings. This has been evident in both a below average and above average seasons.

“The reasons are not fully understood but are suspected to relate to root morphology and how they explore the soil volume for water and also the larger crop canopy on narrow row spacings intercepting more of the light energy and reducing soil evaporation.

“Our research also suggests that reducing row spacings may also increase the amount of nitrogen fixed.”

The first summer pulse trials were established in the 2013/14 seasons and replicated again in 2014/15.

The initial trials were based on a population trials with three varieties (Jade-AU, Crystal, and a pre release line from the breeding program), planted at 10, 20, 30 and 40 plant/square metre, on 50-centimetre rows with three replications of each.

The comparison of the weather between the two years of trials was quite stark with 2013/14 being very hot and dry, while the 2014/15 season was relatively mild for a summer plant mungbean crop.

“Populations are not as important in determining yields and growers should continue to follow current industry recommendations and this fact that lower populations are not reducing yields significantly may help in making replanting decisions when establishment is affected by other factors,” he said.

“Both of these factors, row spacing and population, and their effect on maximising yields in varied climates, along with improved varieties, should lead to greater confidence in the ability to grow a profitable crop.

“We want to ensure mungbeans are a viable cropping option in the farming enterprise and not just a break crop in the cereal dominated systems.”