As winter crop sowing enters its final stages across Australia, Grain Central this week provides a State-by-State update on how the planting season has progressed to date. Today: Western Australia

WESTERN Australian grain growers are facing some tough decisions as an unseasonal stretch of dry conditions, particularly in the north and east of the wheatbelt, takes its toll on winter crop prospects as the sowing window draws to a close.

A rain front that moved across WA at the end of last week brought reasonable falls to the coast and parts of the south east, but largely bypassed those areas of the northern and eastern cropping regions where it was most needed. 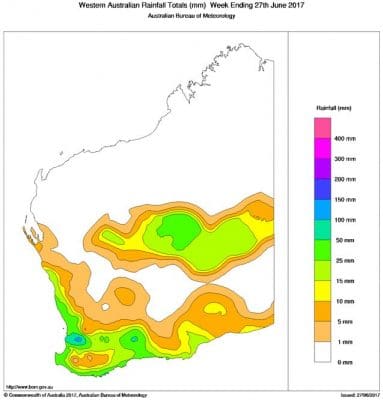 Where the rain fell in WA in the past week. (Source: Bureau of Meteorology)

There is a chance of rain in WA later this week as another front moves in, although it appears relatively weak.

Grain Industry Association of Western Australia (GIWA) oilseeds council chair, Michael Lamond, said in the hard-hit areas a lot of growers had pulled back on their sowing programs, putting in substantially less than they had intended.

“In the north and north east a lot of the dry-sown crops haven’t germinated. They will if it rains, but it will have to rain pretty soon for them to come to anything,” he said. 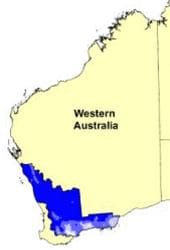 There were reasonable falls in a band south of the highway to the coast through Corrigin, Kulin, Kondinin, Hyden, Lake Grace and Ravensthorpe. But areas to the west of the Albany Highway that runs between Perth and Albany didn’t receive much at all.

“What is shaping up is that south of the Great Eastern Highway is not too bad,” he said.

“The Great Southern isn’t in great shape but the season is a lot longer there, so they have more time for it to come good.

“There are okay areas north of the Great Eastern Highway, but there are big areas where crops haven’t even germinated yet. Some people with patchy germination are going to give the crop away and fallow it.”

“Falls of 10 millimetres were enough to keep the crops going that were up, but barely enough to germinate those crops that haven’t germinated yet,” he said. 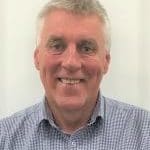 “There is a lot of dry-sown crop in this year. It is very patchy with many crops with a green tinge but none that are really lush. It ranges from absolutely bare where crops haven’t come up yet to paddocks with a slight green tinge.”

Mr Goyder said in the northern farming areas time was running out for crops in many districts.

“The crops are average to below average there now. If they get 25mm from the next rain front it will be great, but if they get 10mm it will be neither here nor there. Places like Dalwallinu, Wubin and Coorow in the northern wheatbelt are quite dry,” he said.

While some analysts have said WA was now only likely to produce half the 16-million-tonne (Mt) winter crop it produced last year, Mr Goyder was a little more optimistic.

WAFarmers Grains Section president, Duncan Young, said crops that had germinated would need solid follow-up rain within the next 10 days to be sustainable and profitable for the upcoming season.

“The majority of planting would have been completed by now, however there would be some farmers who have made the decision not to complete their seeding program in the last couple of weeks, due to the lack of rain,” he said.

“Some may choose to return and complete their program if the outlook for weather improves.”