CROP mapping plans have taken a back seat to this novel piece of ‘agwork’ in a field of wheat that focused attention on the Sydney Institute of Agriculture’s key message for the inaugural National Agriculture Day on Tuesday. A bird’s-eye view of a harvester ‘writing’ the 220m-wide FOOD message in a crop of wheat.

It took a plane to capture the GPS precision harvesting but the message was clear: FOOD! was the Sydney Institute of Agriculture’s focus for National Agriculture Day, writ large in a paddock at the Institute’s research farm at Narrabri in north west NSW.

The FOOD! for thought does not come without a cost – the food art will impact on the crop mapping on the 280-hectare paddock.

But ‘agvocates’ say that is a small price to pay when considering what’s at stake.

On this property alone the crop is expected to produce 840 tonnes of durum wheat – the equivalent of about one million packets of pasta.

And research underway is looking at the potential for heat- and drought-tolerance using natural breeding techniques.

“I was talking with our cropping supervisor Kieran Shephard and we came up with the idea of cutting the word FOOD into the wheat which we were about to harvest – after all, agriculture is all about food production,” said Dr Guy Roth, the director of northern agriculture at the University’s Narrabri crop research campus.

“The word food is only four letters, and we managed that with our state-of-the-art 12m-wide header; Kieran put the metrics into the header’s high-tech navigation system and harvested the letters.

“Whether it is a loaf of bread or a fresh cherry, a lot of technology and management combine to produce the best food in the world.” 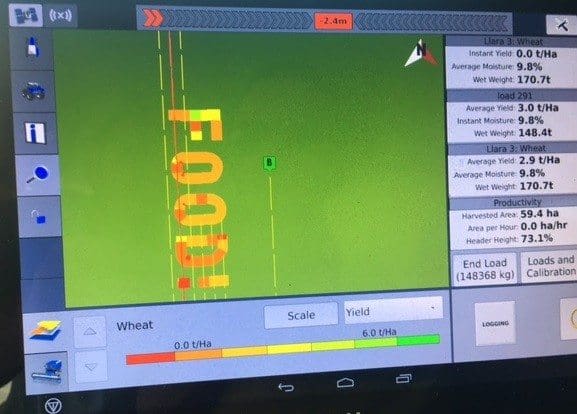 Professor Alex McBratney, the director of the University’s Sydney Institute of Agriculture that launched recently, said agribusiness offered Australia one of the largest opportunities for sustained economic growth in the coming decades.

Professor McBratney welcomed the inaugural National Agriculture Day and said the Institute was optimistic about agriculture in Australia and excited about its projected growth from a $60 billion to a $100 billion industry.

“The current disconnect between consumers of agricultural products and the producer needs to be addressed for agriculture to be a sustainable part of our nation,” he said.

“The Sydney Institute of Agriculture’s research will focus on reconnecting consumers and producers.”