A UNIVERSITY of Queensland (UQ) team has made a discovery that could help conquer the greatest threat to global food security – pests and diseases in plants. 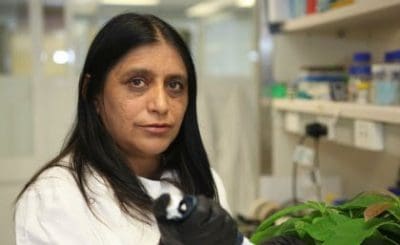 Research leader, Professor Neena Mitter, said BioClay – an environmentally sustainable alternative to chemicals and pesticides – could be a game-changer for crop protection.

“In agriculture, the need for new control agents grows each year, driven by demand for greater production, the effects of climate change, community and regulatory demands, and toxicity and pesticide resistance,” she said.

The research, by scientists from the Queensland Alliance for Agriculture and Food Innovation (QAAFI) and UQ’s Australian Institute for Bioengineering and Nanotechnology (AIBN) is published in Nature Plants.

Professor Mitter said the technology reduced the use of pesticides without altering the genome of the plants.

“Once BioClay is applied, the plant ‘thinks’ it is being attacked by a disease or pest insect and responds by protecting itself from the targeted pest or disease,” she said.

“A single spray of BioClay protects the plant and then degrades, reducing the risk to the environment or human health.”

“The cleaner approach will value-add to the food and agri-business industry, contributing to global food security and to a cleaner, greener image of Queensland.”

“It will produce huge benefits for agriculture in the next several decades, and the applications will expand into a much wider field of primary agricultural production,” Professor Xu said.

The project has been supported by a Queensland Government Accelerate Partnership grant and a partnership with Nufarm Limited.

The Queensland Alliance for Agriculture and Food Innovation is a UQ institute jointly supported by the Queensland Government.