AUSTRALIAN cotton growers have emphatically adopted the new Bollgard III, insect-resistant lines this season with more than 95 per cent signalling they will plant varieties containing the new GM cotton technology. 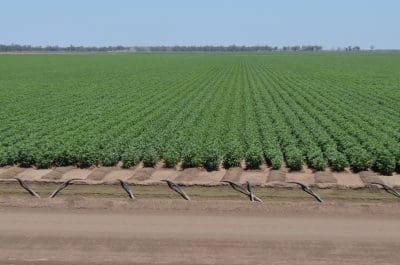 This is the first commercial season Bollgard III has been grown by Australian farmers – the first time anywhere in the world.

Monsanto Australia managing director, Tony May, said the rate of adoption of Bollgard III was the fastest for a new GM cotton trait seen anywhere in the world.

Early planting intentions indicate a strong season ahead, with forecast hectares already 120,000 ahead than at the same point last season.

Indications are the area planted to Bollgard III varieties this year could be in excess of 400,000 hectares.

Mr May said changes to the Resistance Management Plan (RMP) for Bollgard III made it easier to grow cotton, with added flexibility through reduced refuge and pupae busting requirements along with less restrictive planting windows.

“Thanks to Bollgard III, growers have more freedom to choose when and how much cotton they plant,” he said.

“In an encouraging sign, over 100 farmers will join the industry and plant cotton for the first time which is a great thing for the growth of the industry.

“Aussie cotton farmers first planted GM cotton 20 years ago. Since then, we have invested heavily in local research and development partnerships to bring five different products in seven different combinations to the Australian market.